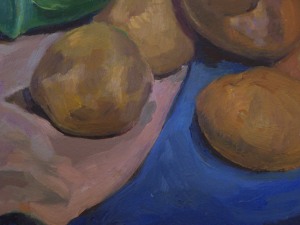 A simple arrangement of objects can have profound significance, as I endeavored to suggest in the previous post.  What then of the structure of the picture itself?  From a particular angle we are faced with all kinds of mysterious accidental spaces. These interstices are the famous “negative spaces” of art school.  Strange appellation, for these are some of the most riveting, jewel-like moments in a work of art — equally they represent the most “signature” elements of an artist’s style, for they are unconscious and very direct expressions of thought.  The artist’s act of looking is spread out over time.  No one is aware of directing this kind of thought.  It isn’t directed.  It’s just one’s mind noticing first this and afterwards that.

And of course the little spaces between things must be rendered if the objects are going to materialize as a picture.  But after that, there is no rule.  One could use one large mass of paint to represent a patch of cloth lying between two potatoes.  Or one could use three brushstrokes. Or one could use fifteen.  Or a hundred.  Or even a thousand very tiny, intimate brushstrokes.

The spaces between things, as well as the pictorial spaces that are things, are the fabric of the image.  They are meaning ordered into shapes, lines, tones, colors.  They have as much reality as the notes in music.  They are utterly abstract.  And into them, all meaning is poured.