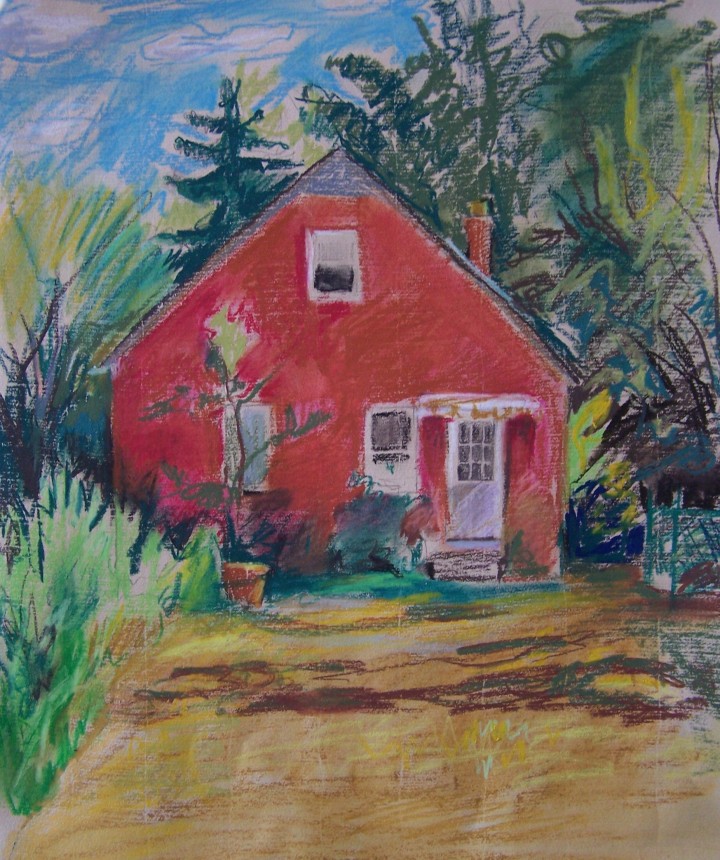 We have a garden in our yard.  It’s become a backyard habitat.  It all began with a compost pile.  The idea was to provide nutrients for the garden’s soil.  So all the household garbage went out to the pile, apple peels, carrot tops, cantaloupe rinds, pistachio shells, coffee grounds.  In they went.

Sometime later, my husband noticed strange worms wiggling around in the debris.  Not knowing what they were, he contacted the Agricultural Extension Officer of a nearby university.  “Don’t disturb those guys,” was the reply.  They’re helping you out.  Eating your compost and turning it into soil.  They’re grinding it away for you.

Soon birds started showing up.  Evidently the worms are tasty.  We were putting bird seed out into the yard already, but these new visiting birds were after the worms.  And they weren’t the only new arrivals.  All kinds of birds starting coming.  It has become a game with my husband and daughter to figure out what kinds of bird visitors we’ve got.  Blue jays, cardinals, brown thrashers, starlings, doves came, even a Baltimore Oriole came.

Then, there was a new development and a different kind of bird feeding event going on.  We had a hawk visit, who came to catch an occasional bird to eat.  We knew it was a hawk before we ever saw him because all that were left were feathers.  But of course some neighborhood cats showed up to hunt and do a little “bird watching.”

Recently we added a bird bath and now there’s a lot of exuberant bathing taking place, with chirping and splashing and thrashing about — and not just on Saturday nights.

Squirrels have arrived in such numbers that I told the family that the yard was beginning to look like it’s been carpeted.

My husband and daughter saw a opossum wandering around one morning, and we have a bunny who’s a regular.  I expect to see deer and moose next.  If we put in a beehive, I’m sure we’ll attract a bear (and this is 6 miles from the nation’s capital!)

All we wanted was some fresh vegetables.  And we got all this.  Mother Nature — you gotta love her.

[Top of the post:  My Backyard  by Aletha Kuschan] 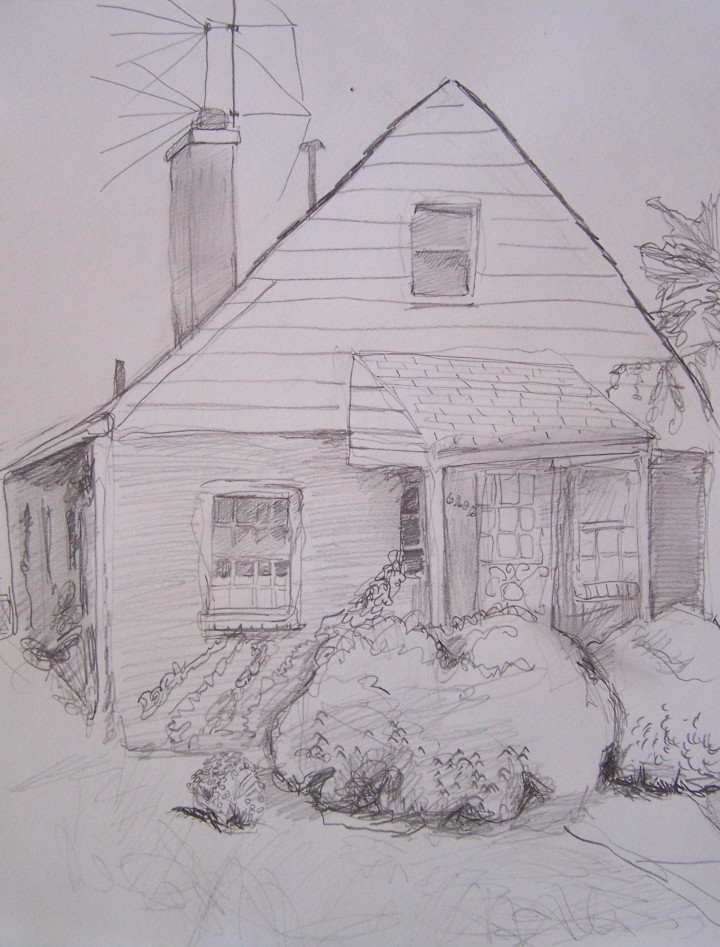 Please don’t make me any offers.  It really isn’t this crooked in real life.  I just happen to live in a little cottage that Rembrandt, with his reed pen, might have turned into a masterpiece of drawing without breaking a sweat.  He had to wander to the outshirts of Amsterdam to find the poignant cottages of his great drawings, but all I have to do is step out my front door.  So, hey.  I can’t complain.

A couple years ago my daughter had an elementary school assignment to draw a picture of her house and write a story about it.  We both went outside to draw en plein air.  This was my version.  I love this drawing.  (P.S. by the way, there are timid funnel spiders that live in the boxwoods who consider this a portrait of their home too.)

[Top of the post:  Crooked Little House that Rembrandt would love,  pencil drawing, by Aletha Kuschan] 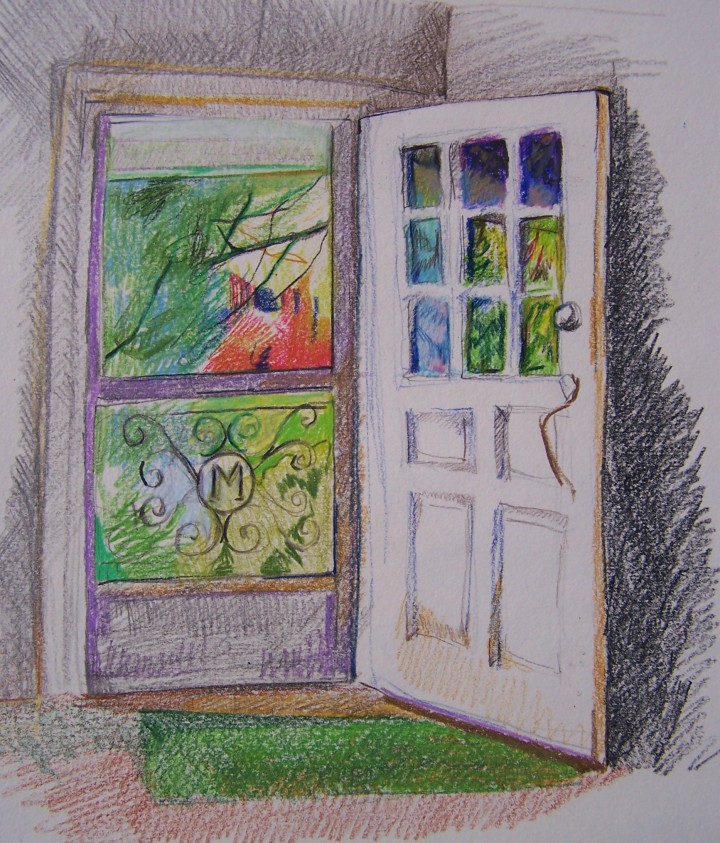 That’s a pun.  You see, the “door is always open” because it’s a drawing not a real door.  And “the door is always open” is an expression denoting one’s accessibility, get it?  (I should never try to do this.)  This pun is, however, a good metaphor for art and I like subjects that are metaphors for what I do.  In painting you make things that never change.  Here, the door is always open; the sun always shines; the leaves are forever green.  It’s a happy picture.

I’ve been an artist a long time, though I will not reveal my age.  Like a popular American president of yore, I celebrate 39th birthdays only now.  But I’m not telling how many times I’ve been 39.  Anyway, with time comes experience.  I know how I could make an architecturally precise rendering of this doorway — or more accurately — I know how to find the information I need and I have the skills to use that information, and I could make this door square by golly.

But I like this crooked doorway.  It’s wobbliness is what gives it charm.  In truth my house could use a little work these days, though I’ve exaggerated its picturesqueness in the direction of personality.  Nonetheless, I had difficulties making this picture and I turned to another artist for advice.  I looked at a painting of Bonnard’s where the same laws of gravity apply and the same slightly distorted rules of physics lend intimacy to inanimate things.  Looking at Bonnard’s painting was like having a chat with him.  He told me what he had noticed and what features he felt were not significant for his picture.  And it helped me enormously.  It gave me a new way of looking at my actual doorway so that I could draw it from life and let perspective go hang.  Here’s the result.  It’s a study for a painting.  I love this idea and in time I’m going to paint it.

An open door combines two genres of art: landscape and interiors — it’s the place where they meet.  It is a going out and coming in all at once.  Believe it or not, it’s a serious motif with lots of historical connections and roots that spread out in every direction.  Matisse, Bonnard and their imitators among the School of Paris artists all did variations upon this theme.

I just decided that it was time I joined their club.

[Top of the post:  Open door in Summer, colored pencils, by Aletha Kuschan] 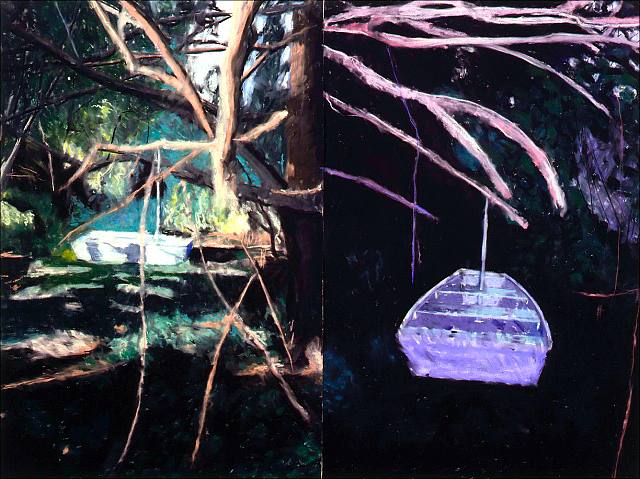 Some artists make you want to paint.  They are “painters’ painters.”  These artists understand painting from the inside, from the seeing side.  Their works are about the world and about meaning, but their images are simultaneously about seeing, about thinking visually and about the act of painting. Often they turn out to be great painters.  Certainly every great painter is counted among them.  (That’s a Venn diagram that I’ve just written, but I’ll leave it to the mathematicians to draw it.  Actually I think I’ve managed to put the idea into words just fine without the Venn.  Actually now that I mention it, Venn and mathematics has a lot to do with my subject, but it will have to wait.  And I’ve got to get out of these parentheses now.)

Jennifer Bartlett has a luscious painterly side (that may make her great someday, who knows?) and a hipster conceptualist/arithmetical side (that I’m sure is quite charming, too).  I used to hate her work.  (But that’s a long story.)

For now, I would have the reader concentrate on pure lusciousness.  It’s summer — a great time to be luscious — like a North Carolina peach. The image above is very large and it’s made with pastel.  So it’s a big drawing.  You know about Elaine’s big salad, this is BIG drawing.  And, well, for the artist, it’s like being able to walk right into the picture.

Bartlett’s imagery has meanings that might surprise some readers.  (They sure surprised me when I first learned about them.)  But while the casual reader is unlikely perhaps to pry into the matter as much as I did, I invite you to offer your ideas about what this picture (which is really two pictures in one) means to you.  I think the meanings that the reader imagines might prove more complex than even the author’s own motivations which are quite serious and deep.

Meanwhile, I think I’ll go draw.  This picture makes me want to pick up my tools!