Some years ago the Phillips Collection in Washington held an exhibit of the works of Pierre Bonnard, and I gratefully went to see it.  Prior to that exhibit, I knew Bonnard’s paintings chiefly from books.  But here was a chance to study his ravishing color and his crazy drawing face to face.

On one of my several visits, I took my notebook and some oil pastels and made this drawing of the orange jug of Bonnard’s 1930 painting The Dining Room overlooking the Garden from MOMA (Museum of Modern Art, New York).

Making this drawing was like being able to take a part of the painting home.

[Top of the post:  Study of an Orange Jug after Bonnard by Aletha Kuschan]

I like the word compotier.  It has many pleasant associations for me, beginning with the art of Pierre Bonnard, that turn of the last century painter whose fuzzy world is so filled with color and intimacy.  When I happened to find a compotier made of blue glass, it seemed like a kind destiny was tapping me on the shoulder.  It’s nothing fancy, but I love it nonetheless.  The light passing through it spreads an intense blue around.  Objects seen though it are distorted in interesting ways.  And, thus, it has become a star among my beloved still life objects.

This picture is the kind of thing that one dashes out to exercise one’s seeing muscles.  It’s an oil pastel “painting.”  And some of the texture of this fine, maleable medium are well captured in this reproduction.  Oil pastels blend in a messy way.  It’s not the thing for fastidious artists.  But for those to whom it belongs, it’s a great tool.  It can achieve very paint-like qualities in a dry, portable medium.

[Study of a compotier with fruit by Aletha Kuschan]

I asked Riosriosrios to draw Durer’s Rhinoceros for me, and here’s what I got!  Isn’t it wonderful! Riosriosrios makes drawings on request.  Albrecht Durer’s Rhino has been one of the most copied images in the history of art, so I was curious what Riosriosrios would do with it.

I think the result is so fabulous.  Art on demand.  How about that!

[Top of the post: Rhinoceros by RiosRiosRios, after a drawing by Albrecht Dürer] 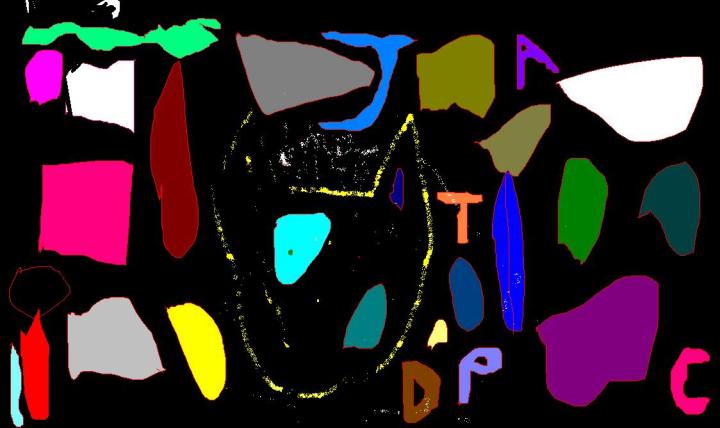 Children have a lot more respect for the alphabet than adults do.  They instinctively recognize how beautiful it is and how useful.  They let themselves be charmed by it, as they let themselves be charmed by so many things.  They have a natural artistic sense, an appreciation for putting things into places, for ordering and rearranging, for lending fantasy to small gestures.

Sometime when I wasn’t looking my kid made this picture using the computer paint program.  It has much in common with the image previously posted, so I thought they should be displayed in sequence.  However, notwithstanding the chronology, I’m not really sure who influenced whom.

[Top of the post:  Untitled by the author’s kid.] 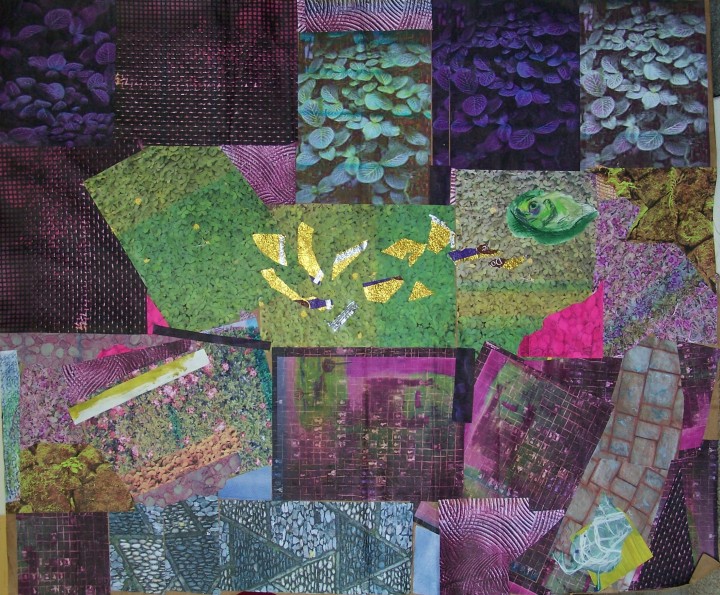 Abstraction is not always as devoid of subject as it appears.  There might be something that looks like this.  Lots of other artists have made pictures this one resembles.  And it resembles other pictures I’ve made that are pictures of something.  So, by following a trail of clues, being a visual detective tracking down myself, I might in time figure out what I was up to. One might in time discover what the other artists were up to as well.  If I am on the same wavelength as others, what wave is it?

On the internet once I found a wonderful website set up by two photographers, husband and wife.  They took amazing, high resolution photographs of the oddest things — bricks, stones, grasses, tiles, old rusted metal surfaces — anything with texture.  Their photographs looked like the most ravishingly beautiful abstract pictures you’ve ever seen.   And they invited anyone to use their work for free.

I downloaded lots of their pictures, like a miser at a flea market.  Each image seemed more beautiful than the last, and I sat before the monitor for a couple hours, watching each image load and then copying it to use later.  My printer could not do the proper homage to their stunning imagery.  But I printed out some of the pictures to make a collage.  My printer started running out of ink, but I continued printing, letting the vagaries of the machine add a further layer of chance to the mix.

I had cut up some paper bags and glued them together to make a large sheet.  Grocery store shopping bags are incredibly strong.  Then I glued the prints of the couples’ photographs together into the pattern suggested by the moment.  I added a few pieces of gold foil wrappers from Lindt chocolates à la Bonnard, and voilà!

[Top of the post:  Collage, La Nuit by Aletha Kuschan, a collage made of borrowed pictures and whimsy]

Squaring up: the technique of copying that uses a grid.  Comparing the squares of the source image to the drawing underway helps an artist draw the relationships between visual elements correctly.  It’s especially useful when an image needs to be enlarged.

And that’s why I used it.  I was painting this bridge into a large portrait and needed to get the architectural structure right.  I made this little version from a photo, then enlarged this image by making a similar grid on the canvas I was painting.  So it had this very practical purpose.

Still I think the gridded drawing has a unique charm of its own.  It turns each square into an abstraction and heightens the abstraction of the image as a whole.  The order that it imposes is also comforting somehow.  Having these grid lines here, I feel confident that this little bridge isn’t going anywhere.  It’s locked down on the page.