One problem that artists have at the beginning arises from a misapprehension.  When seeing a painting in a museum, people often think that that’s it.  They see a complete, whole and finished thing and mistakenly suppose that the artist just painted it.  Such a task, anyone would acknowledge to be difficult, but to create ex nihilo — which is often what people mistakenly suppose artists do — would be really, very hard — perhaps impossible.  In fact most complex pictures have lots of studies that lie behind them.  Studies can take many forms, but usually they exist.  Typically they are not on display.  They reside in the background.  They lie stored in a drawer in the artist’s studio.

What defines a study?  One might say that it’s any work of art that takes a separate aspect of an idea and pursues it in isolation.  When you study old masters’ techniques, you find many such drawings that rehearse ideas that are later used in completed paintings.

So, it’s “okay” to take an idea apart and pursue it in bits.  The drawing at the top of the post is that kind of drawing.  I was interested in the drapery and drew it in isolation.  To create this drapery I had first made a photograph — but even the photograph is part of the pursuit of an idea.  I’m still not certain where it’s going.  Or if it’s going anywhere.

The figure has no head or face and hardly any arms.  These details don’t matter at this juncture, and I left them out.  The details here are to drawing what scales are to music.  This is a drawing of riffs and phrases.  Such things have their own charms. 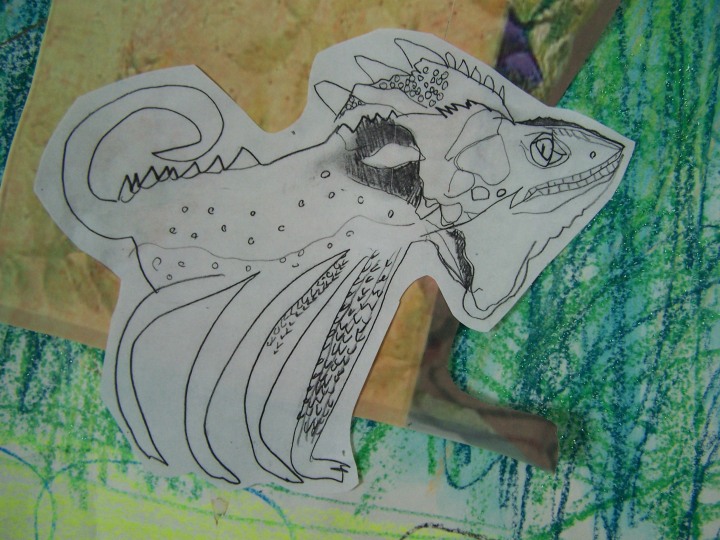 There are many paths to invention.  My daughter made this lizard by one of them.  Let me see if I can recall the details because it was a complex process.

I made a line drawing based on a photograph in a book that sort of resembled this guy to click.  Then I xeroxed the drawing I’d made and cut the xexored copy into several same-sized squares.  I reassembled the squares in random order as individual blocks and taped them down onto some pages.

All together they composed a “drawing test.”  The objective was to redraw each, now very abstract looking individual square, using a set of blank squares (the test paper) the same size as the originals.

My daughter took my “test” and afterwards we reassembled her lizard “copy,” putting all the boxes into their proper order.  Then she made a new drawing that copied the newly assembled lizard made of little squares.  (Are you still following me?)  The lizard above was the result.  We rexeroxed him to have bragging copies, one of which I put into a collage that became a detail a large painting.  That lizard in the collage is the one pictured above.

You know, funny thing, but I don’t get a lot of people asking me for driving directions.  I wonder why ….

[Top of the post:  Very complicated reconstruction of a Veiled Chameleon, by Aletha Kuschan and daughter]

Alice is doing well in the first rounds of Cat Fishing Competitions at Beijing.  As you probably know, the cats have to climb down the ropes, catch a fish at the rope’s end, and successfully carry the fish back up the rope to the end.  So far Alice has only dropped one fish and hasn’t fallen into the water even once.   (Cats hate that, you know.)

She’s been doing fabulously well at this Olympics!  I’ll keep you posted on her progress.

[Top of the post:  Summer Olympic: Fishing Competition, by the young artist of the household] 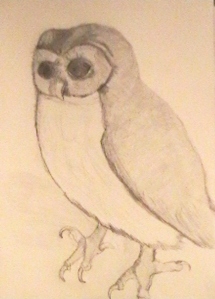 You may recall that last month I had asked Riosriosrios to draw Durer’s Rhinoceros.  (I’m kind of a Durer fan.)  The rhino was fabulous too!

[Top of the post:  Durer’s Owl, drawn by Riosriosrios of wordpress]