Sometime or other around the time I was in high school (dates for which are kept in the secret vault), I was flipping through the pages of a magazine — most likely Ladies’ Home Journal or Women’s Day or McCall’s — and found a sentimental painting of a rural fence post with a stand of chicory growing next to it.  I fell in love with that picture and decided to copy it.  Though I had already been a frequent visitor to the National Gallery of Art and was already a young enthusiast for French Impressionism, it was the not-famous picture of chicory that I copied rather than a work by a master (even among master paintings there are ones that wouldn’t be so difficult to copy).

Cannot say what it was about that image that caught hold of me, but it’s overt sentiment didn’t bother me.  I was reading McCall’s after all.  It was like a Hallmark card.  And I loved it.  (You don’t explain love.)

Feeling very nostalgic now, I was looking round the internet for similar kinds of imagery and stumbled upon this picture by artist John Alexander.  All it lacks is the fence post.  These things have perennial appeal, and I’m happy to report that another artist does something similar Richard Tiberius.  He’s got chicory!  I think these flowers in the Alexander are actually violets.  But close enough for jazz ….

It’s good to let yourself fall in love, and you really cannot argue with love either.  I don’t make copies of sentimental pictures anymore but, oh boy, what a debt of gratitude I feel to — somebody — whoever it was who painted those flowers by the sentimental roadside of  imagination — because that’s what got me started in the year 19**!

I saw a large patch of chicory this past week in front of a frat house of the local university and was thinking today that I should photograph it and do something with it.  Alas!  The lawn mower!  So, once again one learns that you have to seize the day!  But I’m on chicory alert mode now.  The world has more chicory in it, and I won’t be mowed a second time, by golly. 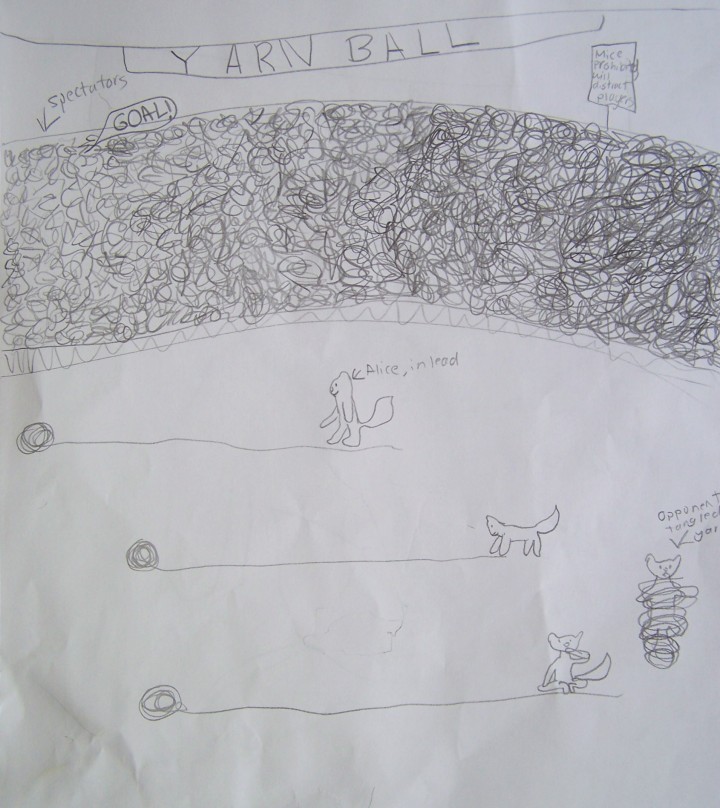 The stands are crowded to capacity!  Yarn Ball is the big event for Cat Olympics!  Indeed, not only are the stands filled to overflowing; security is very tight too.  You have no idea how hard it is to keep the fans out of the game.  When you’ve got yarn rolling in front of  150,000+ cats, you know the tails and whiskers are twitching!

Alice has gained an early lead, but there’s still a lot of yarn on the ball.  This is anybody’s game, and this year’s contenders are fast cats.  We’re rooting for Alice, of course, and it looks like she’s got a great shot at the title.

[Top of the post:  Alice and other Olympic athletes in the Yarn Ball Chase at 2008 Cat Olympics in Beijing, China as drawn by the younger artist of the household]