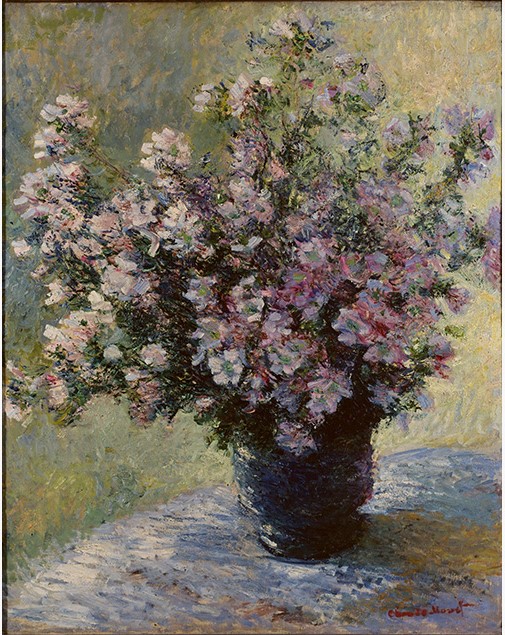 I thought I’d give some advice.  This is free advice.  In a world where so many things are advertised as free, and so few things actually are free, I figure I offer people a genuine bargain.  Anyway, I am going to tell you how to begin a painting — for whoever is interested.  However, we shall not so much as lift a brush right now.  This will be mental painting during which time we look at a photo of a Monet still life and imagine various ways that we might paint something similar.  Are you game?

First, let me say, I took this image from the internet and am not familiar with the actual painting.  Looking at it here, it looks cropped on at least three sides.  Still, it’s quite lovely so let’s take it as it is.

Not many people realise Monet’s Vase of Flowers is unfinished. But in his correspondence, he writes about how he just cannot express the light falling on the flowers and the leaves to his satisfaction. In some places he has scraped paint off while, in others, he has painted over dried paint. Every so often he must have returned to this painting and added a few brushstrokes in an attempt to improve it.

This work leant against a wall in his studio for over 40 years. It was only in the 1920s that he finally decided to add his signature. But, we wonder, after struggling with it for so long, how did he finally decide it was finished? Was he truly satisfied with it? We tend to assume the Impressionists recorded everything they saw quickly, easily and fluidly. Monet knew the impression of light and likeness he wanted to give. But it was sometimes very difficult to translate what they saw into paint.

Let’s begin by noticing the obvious: that by the time the painting got a signature those flowers were long gone.  But how did he begin?  We have to imagine it. Start with the largest elements.  The first marks on a canvas are about the large features of the motif. If you place them first, the reason is fairly obvious: that way, as you make changes you are less likely to have to move around those same large things because they’ll already be firmly situated where you want them. That’s much better than their being where you don’t want them.   More significantly, the raison d’etre of the whole picture (in a great painting) is locked into the large elements from the outset.  But this is still the beginning. What’s the use of being timid at the outset? So you firmly decide to put those marks where you think they belong even though everything hinges on this early decision, oh my! Thank God it’s not brain surgery!

Even allowing for the cropping I spoke of, which was perhaps there from the outset (?) this painting’s structure is solid and fixed as though it etched for eternity.  Certainly within this core, you can really sense the factor that gravity plays.  All the flowers are balanced with respect to the vase so that we know the vase will not topple, though notably the arrangement is very natural and asymmetrical.

The clump of flowers sits just above the vase like the bough of a tree.  The vase itself has been realized very simply as a smallish cylinder, its rim partly hidden by the lower most leaves of the bouquet.  One could indicate the edges of the cylinder with just a couple strokes in the beginning.  One side of the cylinder is lit and is lighter than the background.  The other side is in shadow and the edge of the background just adjacent to it is slightly lighter than the background overall.

Above this cylinder, I would — if it were me — scrub in a little green in droopy passages to represent (in the most amorphous way) the lovely green leaves that crown the vase — from which the flowers emerge.  I would, if I were beginning, keep things simple.  I would make the green very generic and the blue of the vase just a little warmed by a little yellow.  The background is mostly greyish created through a combination of yellow ochre and ultramarine blue that have been diluted with lots of white.

Some of the leaves are dark, some are light.  For the dark, I would thinly scrub in some veridian or phthalo green from the tube.  And the lighter leaves can be made lighter with an addition of pale yellow and white.  At the outset, the point is to mark the contrast — leaving the nuances for later.  Similarly, I would put the flowers in early, trying to position them with precision — though not a precision that is obtained by hesitation and worry.  I would approach it like target shooting.  Aim, fire.  If you think the flower is “this big,” make it “this big.”  If you think it goes “here,” put it “here.”  Don’t take all day.  Stick ’em in there like you were arranging flowers in a real vase.  If they don’t look right, move them before the painting gets complex.  Use a thin amount of paint at first, draw lines, be spare and free about it.  Get them as close to their relative positions as you can discern and then move on.  (It is just a painting, after all.  First of many.)

The curve of the round table is very gentle, and it takes up very little of the composition as we see it here.  You could draw this contour in with a red line — or a grey line.  This contour intersects the vase at just below the half way mark so that’s a helpful landmark.  I would “measure” these things optically, however, in our target-shooting spirit.  The point of drawing things directly is that you teach yourself to sense proportion and shape in a natural way — you begin to internalize a gesture that matches what your eyes see.  Whenever you let hesitation and fear of mistakes scare you into grabbing tools or using all kinds of hand gestures and whatnot to get the proportion, you might as well be sending yourself an engraved invitation to be timid.  Put the things where they seem to belong.  The worst you do is get relationships “wrong,” though later this “wrongness” may turn out to be interesting.  It will at least reveal to you what you thought you saw, which admittedly has some meaning of its own.

Indeed, the advantage of copying something is that the source remains stable.  If art conservators do their job well, Monet’s painting is not going to change.  Thus the differences in how you perceive the painting can always be measured against the stable image.  For that reason, it’s good to recopy a painting that you copied “incorrectly” in the past.  You begin to learn the painting, just as a musician learns a piece of music.  It’s a good exercise and through a succession of variant copies, you can watch yourself making progress.  Later at some calm junction of your life, when you have gained experience and are ready to forgive yourself for making mistakes, you can also look quietly and objectively at the distortions or errors that you introduced into the image, and sometimes it happens that you discover a distortion that you actually rather like.  At that moment, congratulations!  you have found a new source of invention!  Matisse built a whole career on expressive distortion, raising it to a high level of enterprise.

From first gestures like these, you build up more and more information about the image you are copying.  You begin by putting in the first biggest “things” and the biggest relationships between things.  Please note that the empty spaces of a picture are as much a part of the image as the stuff is.  Yes, there are flowers.  And there are spaces between the flowers.  One paints the whole thing.  A wise artist will realize that the spaces are not insignificant.  Quite the contrary, as in real life, the spaces determine that the “things” will be where they are and will be what they are.  Where would we be without all our lovely molecules, I ask you?  Where would the flowers be without the air that surrounds them, without the shapes that press upon their locations?  The painting is “everything,” and you must be aware of this “everything,” even if only subliminally.

You deal with the big things first:  the big shapes, the main colors (let your green be green and your yellow, yellow, and add in the nuances after).  Later you look at each of the many parts, and you treat each of the parts as though they were the whole (for in a sense of course, they are).

Now, you might ask (I hope you’re asking), which parts are parts in an image where everything matters?  When the spaces between the things are as much factors as the things themselves, how does one demark the difference between part and whole?  Oh, this is where painting becomes very philosophical and personal.  What is a part, you ask?  A part is anything that you perceive as being a part.  Even in making a copy, you are doing something very personal.  For you will notice different things, in a different order than Monet noticed even in copying his painting.

This order of attention, this order of operations, this “I notice this” and “now I notice that” is your individual mind at work.  It’s a lovely process.  Don’t mess with it, just indulge it.  Try yourself, test yourself to see how much you can notice.  Try to notice more and more.  Record what you notice, as you notice it.  This journey into perception is “the beginning of knowledge,” for the painter.  Take it.  It’s a fabulous trip.  Believe me!

Once you start paying attention to the visual world in this manner, you will see things differently around you.  What you first see in a copy of a Monet still life, will reap observational benefits of intensified awareness all around you.  The world is a beautiful, subtle, technicolor place.  We just have to learn to see.

One thought on “Attention’s Gaze”