Back in May, I posted a still life I made many years ago of a cabbage and potatoes.  This drawing is its distant cousin.

I drew this from a photograph, and like the lake of two posts ago, I find it provides a good practice for some drawing outdoors that I’m hoping to do — en plein air.  But it also has the same basic forms as the earlier still life.  Indeed, I was thinking of getting some potatoes and inventing a landscape from a still life perhaps?

One of the wonderful things about drawing is the way it lets you take imaginative journies.  I can vicariously visit the rocky outcropping by drawing it from a photo.  And I can travel there even with some potatoes too?  I don’t necessarily need a travel agent to find a locale that’s very bucolic and peaceful where I can bask in the warmth of the sun.

The drawing one makes from life is often sloppy.  Well, sometimes life can be sloppy.  Nature is often sloppy with leaves and branches going this way and that way.  I can’t recall where I was or when I drew this, but I can see that I was in a hurry.  Yet I was able to grab a lot of specific impressions of the place and its colors.  Something of the mood, too, of the bare trees — and perhaps a cold day — comes across in the form of a bracing sense of air — and ambiguous contrasts of solitude and almost frantic energy.

One of the wonderful things about working outdoors is the sense of connectedness you get to the moment, the specific time of day, the temperature of the air, the sense of the air around you and the emotions inside you. 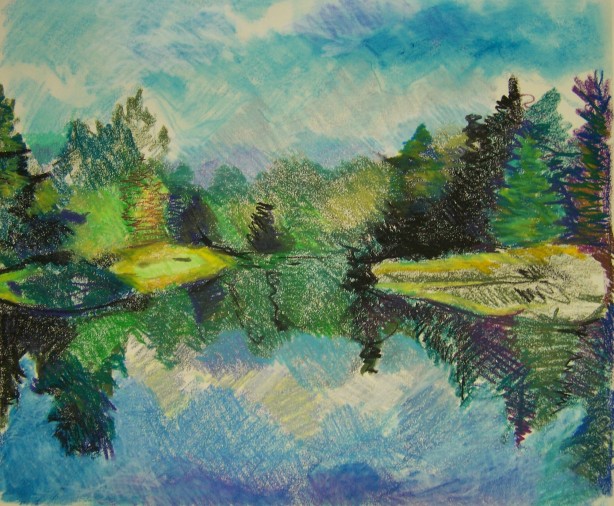 The water is a mirror, the first mirror. Narcissist might have bent over this glass. When water is very still, you can’t tell where the surface is. You can wonder if it’s a few inches away or several feet. I saw a pond like that once — in the middle of the forest — so still that its depths seemed only eternally to elude my touch, and it seemed also to resonate silence, an anechoic chamber of liquid rationality.  This place was still.  This place was so quiet.

I have some favorite things that I like to draw, this pond is one of them. I’ve drawn and redrawn it many times. I play it like a tune softly on the piano, noodle around with it, and its music is all rests and no notes. It’s not even a real drawing in the usual sense, but is just me making marks along the page, tossing virtual pebbles into the water, skipping them and waiting for ripples that never happen, that never come, for no echoes sound in this pond that is eternally still.

The clouds float by above and below, forever. Water vapor above, liquid water below. Mirror of light. The air will always seem to vibrate with an aqua-blue vibe. The marks, the restless marks, caught my nervous energy and fix it into a picture where I can look back and see Nature meeting me.  For we’re here in this place, this grand and stunning place, and Nature waits upon us to notice. 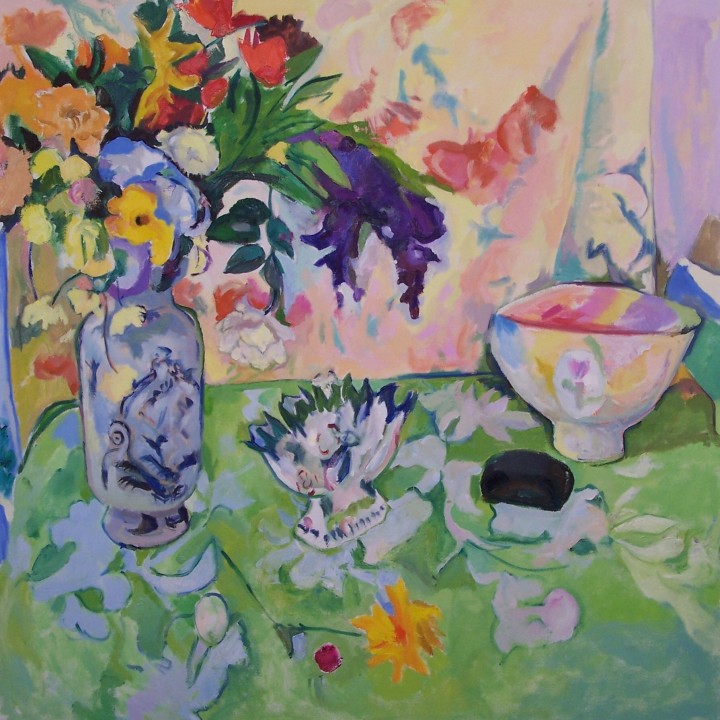 The green cloth of the current still life drawing is one I’ve used before.  In this picture I shoved the flowers off to one side.  The objects in this still life all seem to have enough solidity to make them really citizens of the still life.  And each one has a little bit of turf carved out.  I don’t envision that bowl ever infringing the territory of the vase.

When I walk around the easel and look at the still life from the other side, it looks like this.  I think this is such a pretty view.  Sometimes it’s hard not to jump at doing this view right now.  But I have to finish the other one first.

And, you never know.  The fish might start to beckon again.

I tried to post this yesterday and wordpress wouldn’t let me (bit of a snafu).  And today I have tried a couple times to load some new photos to my computer and my Kodak Easy Share ain’t sharing.  This is what happens when technology rebells.

Anyway, this drawing is 30 x 48 inches so it gives me plenty to do.  I have some photographs of the still life, too, taken from different angles — helps me get ideas for other versions of the same motif.  Degas counseled the artist to “redo the same thing ten times, a hundred times,” and he thought you should look at the same motif from different angles.  Since I’m working in a pastel-like medium, his advice comes readily to mind.

This drawing is made with Caran d’ache water soluable crayons on Canson paper.  I’ve got a lot of quickly and vigorously drawn green lines down there at the bottom.  But I’m trying to work them into a dense Degas hatching mix.  More on that later.

If I can get my computer to cooperate! (Never let a PC see you sweat.)

Today’s been kind of busy!  I don’t have time to comment at my own post.  But it’s been a fabulous day here.  Hope you’ve had a fabulous day, too, wherever you are.  Sometimes there’s not enough hours in the day — in a wonderful sense.

Just like a kid.  I’m going to have trouble sleeping tonight because I just want to keep playing.  Been drawing my flowers, as you can see!  They’re beginning to get there.

Can’t wait for the sun to come up tomorrow!

If you have questions about techniques or just curiosity about the how to of art, drop me a line by way of a comment.  Might make good material for a post, because if you have a question, there’s bound to be others who are wondering the same things!

When you look at the details of a picture, you see how its illusion is created.  The image above is a detail of one section of the flower bouquet.  It zooms in on the flower patterns of the cloth that’s piled up against the vase of flowers.  From this vantage, much of the expression of three dimensions is lost to sight.  The shadows and the lights appear to exist on the same plane.  In the detail, one realizes how much the third dimension of this particular drawing was created by the motif as a whole since without the whole motif we cannot see distinctions of figure and ground.

These “textile” flowers are as impressionistic as were the “real” flowers in the vase.  Both are abstractions: shapes that appear in masses whose details consist of lines, hatchings and scribbles.  So, for instance I began some of the flowers of the textile’s pattern as rough, smeared shapes of red crayon.  And afterwards I went back into that red with lighter or darker shades to begin the process of imitating the tonal differences within the flower.  The irony is that is so doing one makes a “picture of a picture” since another artist designed the textile that I use in my still life.

The character of the drawing materials is hard to conceal, and I made no effort to hide it.  The visibility of the drawing is what attracts me to the use of crayons.  But it makes the illusion of the subject harder to achieve.  The tonal qualities of light passing over objects — the light and shadow of the cloth and its folds, or the diffusion of light around the contours of the vase, or the contrasts of light and shade amid the masses of flowers and leaves — all these effects have to be created through either hatchings or smudges and are refined by careful positioning of light or dark or warm or cool tones.

The visual qualities that pass before your eyes, the numbers of choices available to sight, are staggering in potential complexity.  From among all these possibilities one chooses a path that is your rendering of the picture.

It’s as though you confront a vast field thick with flowers and wild plants.  You see a prospect you want to reach, and you ponder what direction to take through the brush to reach your destination.  If you follow something you learned from an old master, it’s as if you have found a path that you can walk for a distance.  And when that path wears away and returns to the full wilderness of the meadow, from that point onwards you must walk your own path.

And this fact is not a difficulty.  It is freedom.

I let a bunch of time go by without posting anything.  Like many bloggers, I spend some time musing and pondering this new medium called “the blog,” and wonder aloud about the different genres of writing that it can evoke.  For me as an artist, I would have to say that it’s impossible — or nearly impossible — to write about the work I’m actually doing —  at least when I’m doing it.  Art doesn’t make good journalism.  Art is not an “every day” kind of topic.  No “breaking news” going on.  It’s mostly quiet stuff.

I mean I could write a narrative of how I actually work.  But would anyone read it?  And survive?  Awake?

Painting is a slow art form.  Sometimes it’s like watching an ant parade.  You make all these abstract decisions: how large is this shape?  what color is this exactly?  should I put this here or there? should this line be wider?  lighter?  should it taper? or should it be bold?  or is it okay — even wise — to fudge?  to guess?  to be in doubt? Should an edge be hard or soft?  Do I draw today?  Or should I paint?  And for me, lately, my questions are ones like “do I finish the koi or begin the flowers?”

How does one make these questions interesting for a reader?  Even my mother is not holding her breath waiting for the answers, yet these choices are — they really are vibrant, living questions.

To be able to describe the act of painting and all its attendant thought processes would be a fascinating project if you could truly put the reader into the same relationship with things that you’re in when you paint.

That’s one of the things I try to do, but it’s hard.  We are the heros of the dramas we live ourselves.  Yet it doesn’t always look so exciting to the outside observer.  To capture the authentic excitement of quotidian existence ain’t easy!  Especially when its small and it unfolds slowly.  Like molasses leveling.