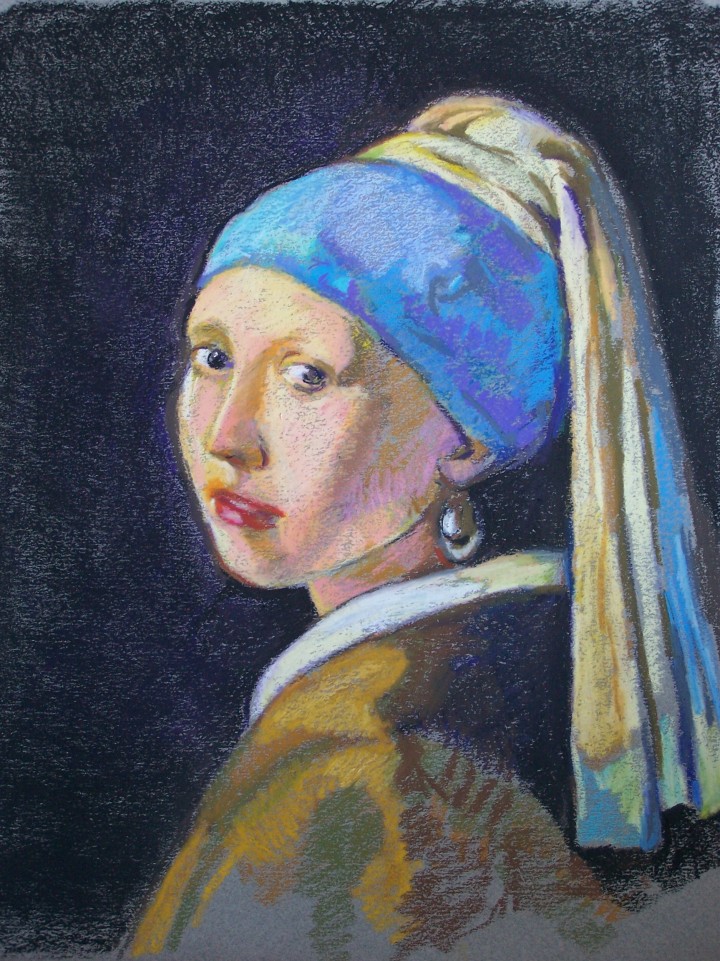 The web has a bunch of “drawing challenges” going where people offer subjects to draw which are afterwards anthologized in a blog.  One such challenge that I recently stumbled upon is Sheila Thorton’s Old Master Copy Project.  Since I used to do a lot of copying of paintings at the National Gallery of Art, I couldn’t resist this challenge.  This month she has two images, one of which is Vermeer’s Girl with the Pearl Earring.

The deadline for this challenge ends January 1, so better draw/paint fast! (The other image she chose is Durer’s drawing of his mother.)

These things that people do to motivate themselves and others, to make art in this instance, in my opinion, is one of the neatest, finest aspects of the Internet.  A whole lot of drawing is going on under the radar screen.

Have you made your New Year’s resolutions yet?  Let one of them be to draw!  Or if not that, since drawing isn’t for everybody, then buy art! 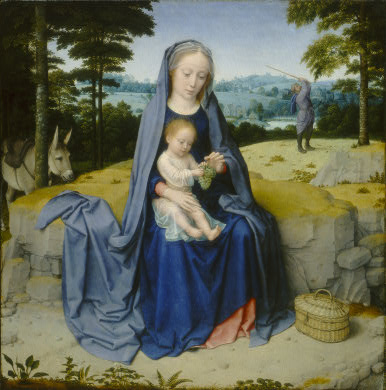 This small lovely painting is not only a masterpiece of spiritual feeling, it is certainly one of the most strikingly nuanced expressions of form and color found among Renaissance pictures of the Virgin and Child.  To look, for instance, at the colors of the two blue robes Mary wears where they interact subtly with blue green shadows of baby Jesus’s  diaphanous garment is to discover an incredible range of cool and warm blue colors that play across feeling like the notes of a jazz riff.

The sense of stillness and balance that suffuses the image through its drawing is present in all its tonal and coloristic qualities as well.  And every corner of the picture has its own pictorial delights.  Hard to see in the reproduction, but in the right-hand foreground is visible, for example, just the edge of a little stream.  The clarity and detail of Mary’s basket can not be described as anything but magnificient.  And the folds of Mary’s outer garment is such a stunningly fine tribute to the laws of gravity such that  no physicist of our modern era could begin to better, no matter how elegant his equations!

In short, painting doesn’t get any better than this!

In case you’re wondering what Joseph is doing back there in the background:  he’s knocking nuts from a tree.  And on the other side of the picture, the donkey is quietly foraging.

Gerard David
The Rest on the Flight into Egypt, c. 1510
National Gallery of Art, Washington DC 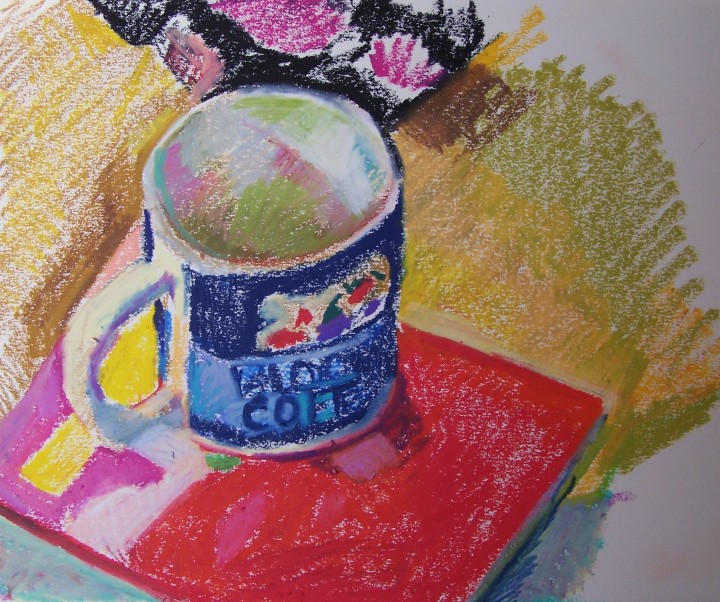 Fans of the great French painter Paul Cezanne, as well as fans of the old television series Star Trek, know what happens to your stuff when it encounters a spatial anomaly.  Well, I’m happy to report that the space-time continuum at my place is doing just fine, thank you.  Nevertheless, a little distortion never hurt anyone, and I happened to get really very interested in the interior space of my empty coffee mug.

So, I really went in there and took a look around.

A couple posts ago I was writing about the joys of letting your mind be free to wander visually around, to let your eyes make unfettered discovery of the perceptual wonders that your mind finds enchanting — and proportion be damned.

See, I practice what I preach!

(Oh, by the way, I drank the coffee.)
Come visit my store on CafePress! 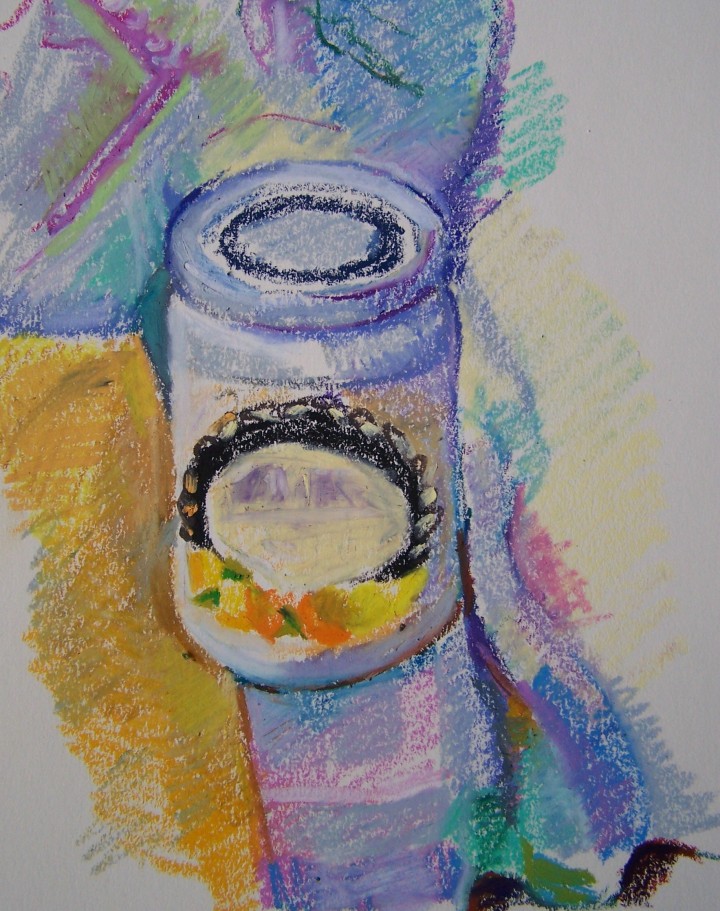 Some lines in the cloth behind the marmalade jar make the whole composition look akimbo, turning my jam jar into a rhyme or metaphor for a famous leaning tower somewhere across the pond perhaps ….

I have painted this favorite jar before and let the manufacturer’s name appear, which is a fun if somewhat exacting bit of painting.  But today my jar is rendered anonymous and exists as art for art’s sake — or perhaps as marmalade for marmalade’s sake (?).

I mooshed the crayons down into the paper so forcefully (mooshed, for those of you who don’t know is a technical term … ahem) that the crayon is impastoed.  These wax crayons (Caran d’Ache Neopastels) are the next best thing to paint.
Come visit my store on CafePress! 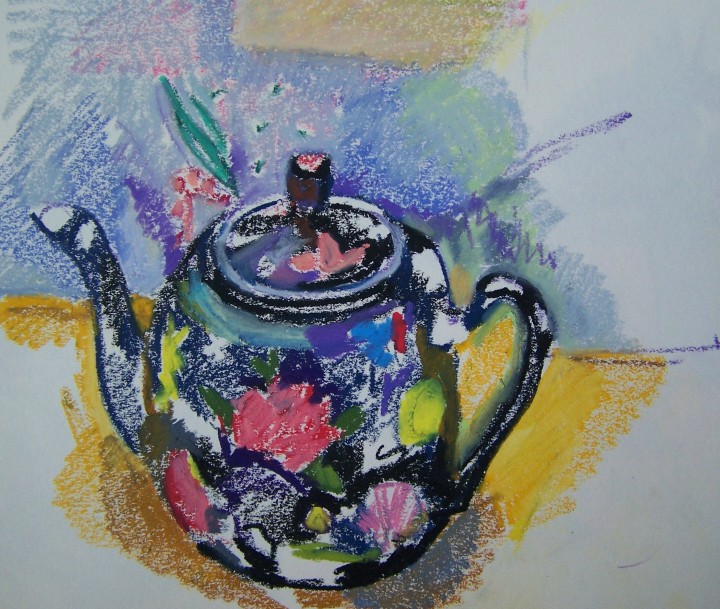 I was thinking about how I used to  get so lost in looking at objects when I first started drawing, many years ago in my youth.  I did not then always start in a logical place.  Sometimes I just started with the first sensation of color or line that caught my attention.

Sometimes my drawings were way out of proportion when I did not consider the whole object but instead fastened my gaze on one part — and then jumped to the next part that caught my notice — and then the next — and so on, like a grasshopper holding a crayon.

I was thinking this morning how delightful it would be to draw that way again.  To go where delight leads and let the lines fall where they may.

Naturally with my teapot sitting right there, it became the star of my rejuvenated experiment.
Come visit my store on CafePress! 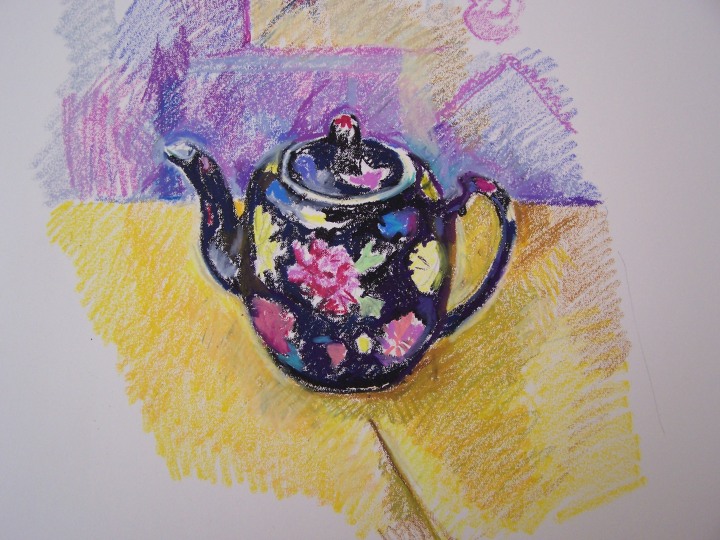 Anyway, I drew this quickly today with some wax crayons.

One of these days, I’m going to nail this thing perfectly!
Come visit my store on CafePress! 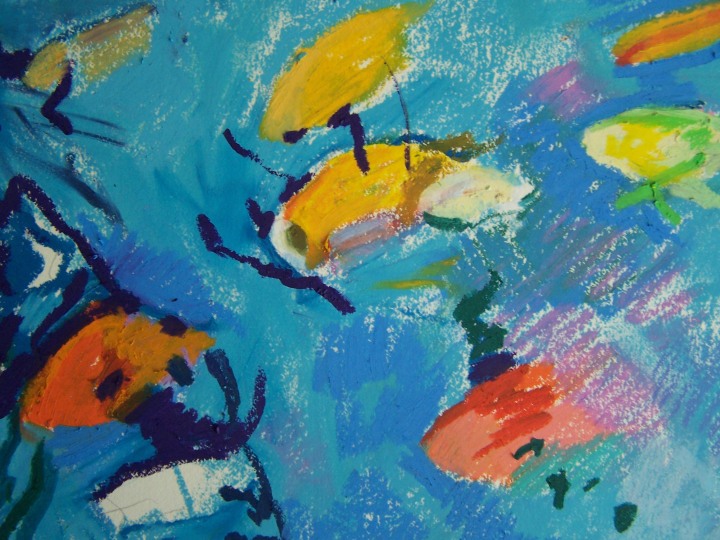 Here’s another view — a close up — of the drawing I reworked while waiting on interminable hold today as I both drew and addressed financial matters at the same time (see previous post).

The drawing is made using Caran d’Ache wax crayons.  They are very messy and smudgy in a lovely, descriptive way.  Very blendable and versatile for drawing, the crayon color effects are almost as rich as painting.
Come visit my store on CafePress! 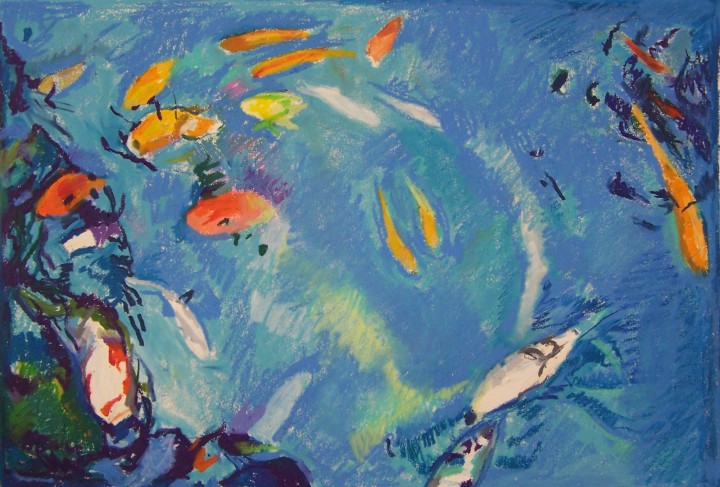 Lots of artists want to know how you get copious ideas so that you can make many fine pictures.  Certainly the habit of drawing and painting often makes it more likely that you’ll gain skill and confidence.  By often looking closely and making many eye-hand decisions, the more direct your work can become.  So how do you maximize the conditions to lead toward a prodigious creativity?

One method is to revisit and rework existing images (like this one, which I posted previously).  And another secret is to get yourself a “hands-free” telephone device (or an intercom phone device) and make virtues of necessity.  That, friends, is just what I did today.  And I’m ready to share my secret with you.

If you’re like me, you sometimes have phone calls you need to make that you’d prefer to postpone indefinitely!  I needed to consult a utility company about a billing question, and some other “service providers” about some other matters.  I dragged my feet as much as I could risk doing financially until I had an ephipany and also had possession my new “hands free” device.  [Note this procedure will also work with regular cell phones or “land line” phones but you risk a sore neck.]

I called the utility company’s handy “toll-free” number whereupon I was greeted by a warm sounding, fake, mechanical voice — a querulous fellow, he asked me ever so many questions to which I was either to reply in words or tap a number on the key pad.  (I observe with great interest that as the human population swells, it nonetheless becomes more and more difficult and complicated to locate an actual human being who works at a utility company with whom one can genially converse.)

Anyway,  while this nice mechanical fellow paraded before my attentive ears ever so many numerical options — push “1” for this, and “2” for that and “2,544” for something else, I waited expectantly, hopeful for that one special option, that of  “talking to a fellow human being,” a living member of my same species!  I was even so bold to say I wanted “to talk to a human being,” for saying words and phrases is also a way of interacting with this chipper mechanical guy.  But to that request, he replied, “I’m sorry I don’t recognize that option.  Would you like to make another choice?”

Fortunately, I am fluent in sales-speak, whereupon I asked to “speak to a customer service representative” and it worked!  He did try to talk me out of this elegant choice by pointing out that all their lines were experiencing “heavy traffic” and that I might have to wait until hell freezes over … maybe he used a different expression? — but that was the gist.  Resolute, though, I chose the infernal deep freeze option because I had …

… a secret weapon!  I had my drawing sitting in front of me where I could work steadily and I could listen to the chinky, musacky version of the Brandenburg Concerto that they play to amuse comatose callers waiting their turn in the phone queue.

Dear friends, how do I convey to you the sense of liberation I felt!  While I might have been proverbially beating my head against the sound barrier of the great telephone service representative’s “brick wall” of snub silence and canned music, I was instead adding new colors and ideas to my koi drawing!

A half hour passed before I was finally permitted to talk to the utility company’s coveted service representative (actual living being), but I was undaunted!  “Ooo, ooo! hang on one moment, please could you? while I just add this highlight here to the koi’s left eye ….”

The only sad news to report (other than that they are going to be taking money out of my pocket and putting into theirs again) is that I got through the entire “put on hold” experience so quickly!  The first transaction lasted only about thirty minutes!  I really need to find some more monolithic, uncaring corporations to deal with so that I can be telephonically snubbed long enough to do more than make quick sketches!

But, friends, there’s a whole world of service providers out there!  And, they are all so dependably reluctant to allow you to converse with their insulated and carefully chaperoned employees!  So, I have great artistic hopes!

Yes, I do!
Come visit my store on CafePress! 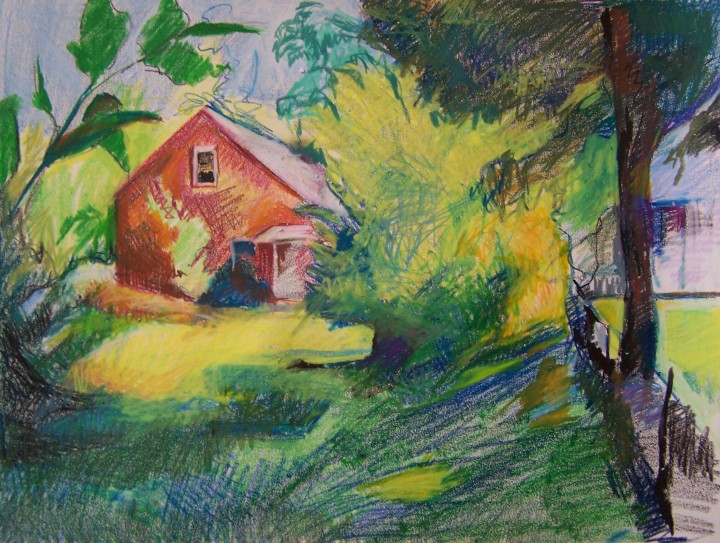 Isn’t that what Dorothy discovered in the Wizard of Oz?  Well, it has sometimes worked for me.  See how the sun has lit up my own personal corner of the cosmos?  Providence smiling here.

Er, well in summer anyway.  Right now it’s cold outside!  Here’s another reason to draw … to escape from the rigors of the present!
Come visit my store on CafePress! 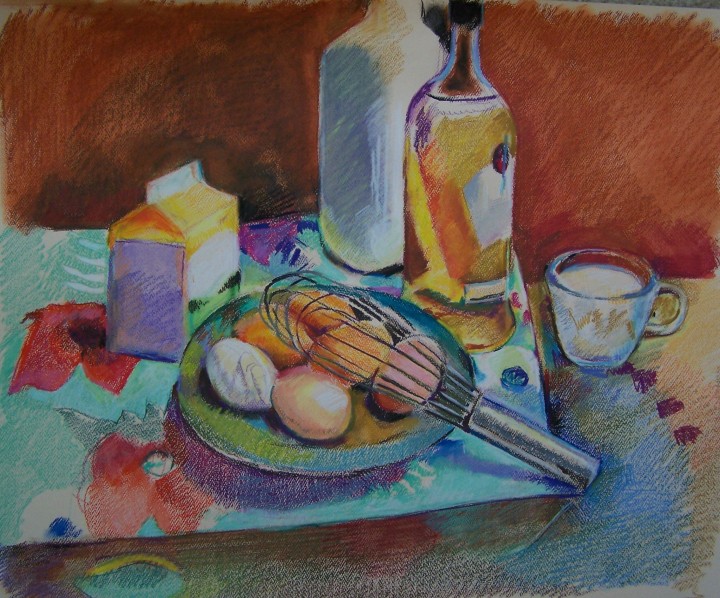 A slightly different version of this drawing will appear in the next issue of Edible Chesapeake magazine, due to hit the streets just before Christmas.   Both drawings would have been a little tighter if the publisher had perhaps let me get a little tighter.  She was making eggnog while I was drawing the ingredients.  And I got to taste the several versions as they were being prepared.

However, the publisher (perhaps thinking of her magazine) was over prudent when dispensing the libation (which tasted fabulous, by the way).

Still, I was pretty inspired.  But I think about how much more inspired I might have been….

Come visit my store on CafePress!