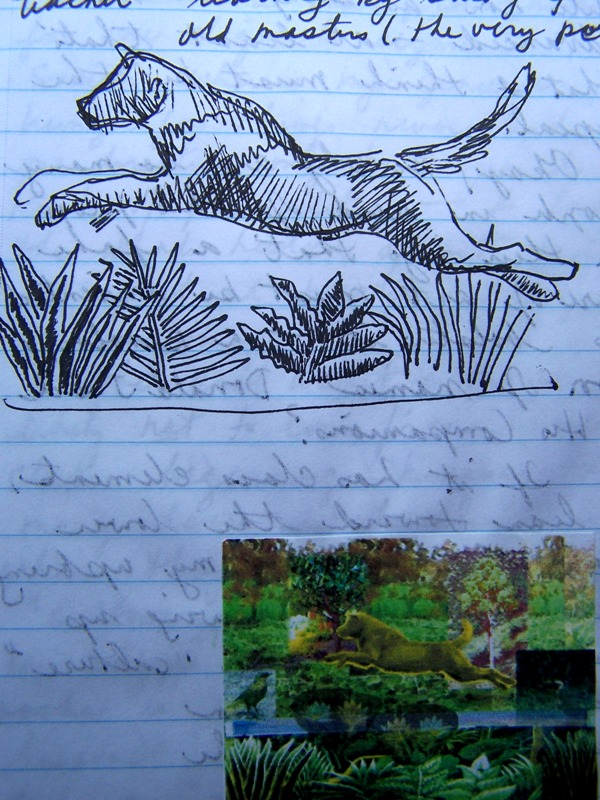 I’ve been playing around with a certain idea for a long time without making a painting of it.  It’s based on a dog we had — now deceased for several years — he was — how should I put this? — athletic.  So I had this idea of Spottie Leaping Through the Forest.  His name was Spot.  (For Star Trek fans he was named after Commander Data’s cat.)  And he leaps through the forest because he’s hunting.  Our dog loved to chase squirrels, and a couple of unfortunate squirrels got caught too.  Spottie was fast.

It was to be my version of Henri Rousseau.  However, it still hasn’t quite made it into paint.

Nevertheless, I’ve made a bunch of sketches and even made a computerized collage from photos collected from the internet.  Evidently I printed out a postage stamp-sized version of the computer collage and pasted it into a notebook below a pen and ink sketch.  Funny the idle things you do, that you forget about, and then later rediscover one day while cleaning.

In the miniature version above a whitish layer of something photographic seems to create a water’s surface as though some of the image is above the water and some things are underwater.  I never noticed this before today.  I don’t remember noticing this quality in the computer collage when it was printed full size.  So, sometimes the endless fiddling around that one does while playing with images creates new possibilities.

It’s a slight thing, but I like the idea that I could portray the surface of the water and things underneath it. 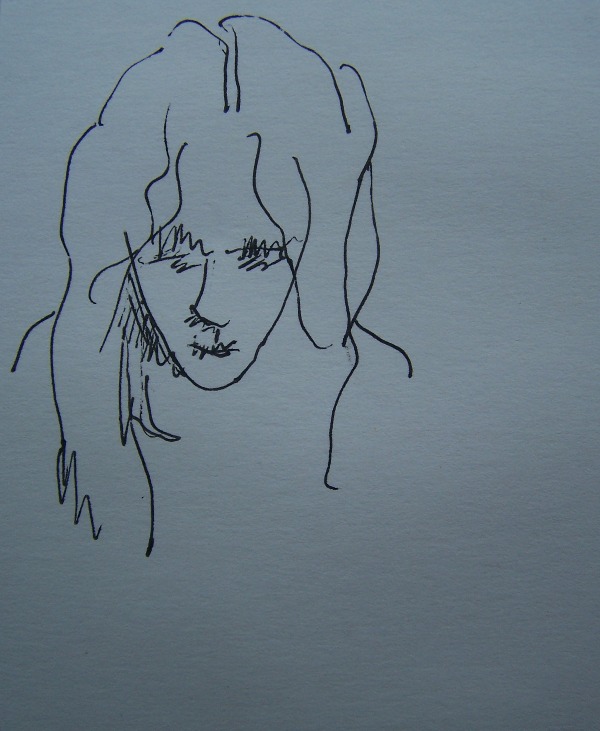 The sketch stands at the opposite end of the highly realized drawing.  If you really want to understand the sketch, if you’re an artist, you should spend some time doing the most elaborate kind of drawing that you can do.  Or, if you don’t wish to make detailed drawings yourself, spend some time studying some examples of careful realism.  And after you’ve studied detail and really thought about it some, ask yourself:

What is the charm of the sketch?

It’s important to do this right.  Ask yourself the question, but don’t be too hurried with an answer.  Maybe you will never find an answer, but I hope you come to understand the special charm of the ephemeral idea that takes fragile form in a sketch.

Ponder it.  Think about it a long time.  Look.  Draw.  Make sketches.