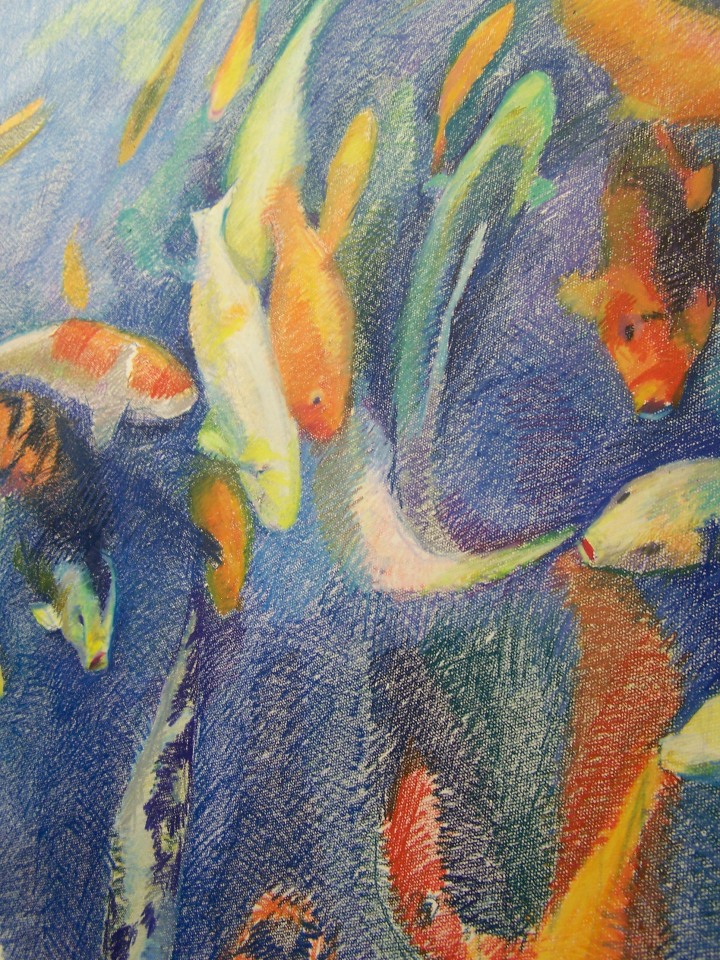 After working on my drawing at the secret bunker studio, I took photos as I usually do.  Then got an odd notion.  Why not photograph the picture from below as one might see it if it were mounted high upon a wall.  (Sometimes that’s the only way you can photograph pictures when they’re housed somewhere.)  And as I saw how distorted the image became, I inclined to indulge the distortion in extravagant ways.  After that I was in search of distortion, the stretchier the water’s topography, the better.

When you’re photographing the real fish, their movements and the wave patterns are often stopped artificially or alterred greatly from what our brains tell us we see.

Photographing the drawing from every angle across its flat plane, I saw the fish begin to “swim” even more — round the curved edge of the earth’s watery.  Like koi explorers they looked to drop off the edge of the space-time.  And the blues widened like a curtain furling.

If I were to use these distorted photos of my drawing as reference images for other pictures, I could draw the distortion right in and jazz riff something new.  Or one could combine the distorted sections into a new “whole.”

Collage is possible, or rescrambled puzzle pieces made more puzzling.  Lots of improvisations possible as one follows the path.  Or the wave.  The fish wave.

I decided to treat my drawing like it was a real pond.  With real fish, who move.