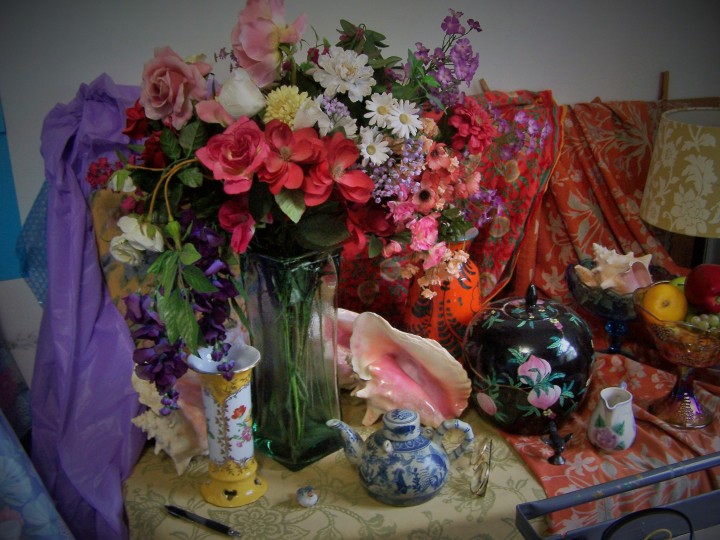 Begin with a crowded colorful still life.  Take the pencil in your drawing hand.  Pick up the notebook with your other hand.  Hold the notebook while looking into the direction of the still life, and two, three, draw-a-line.  Again, “LOOK, three, cha-cha-cha.”

For the basic elements, I begin my dance with a fast pencil drawing. 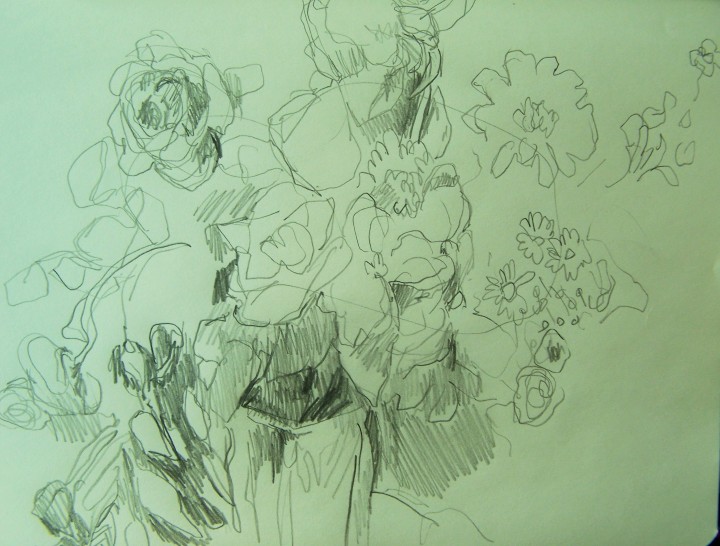 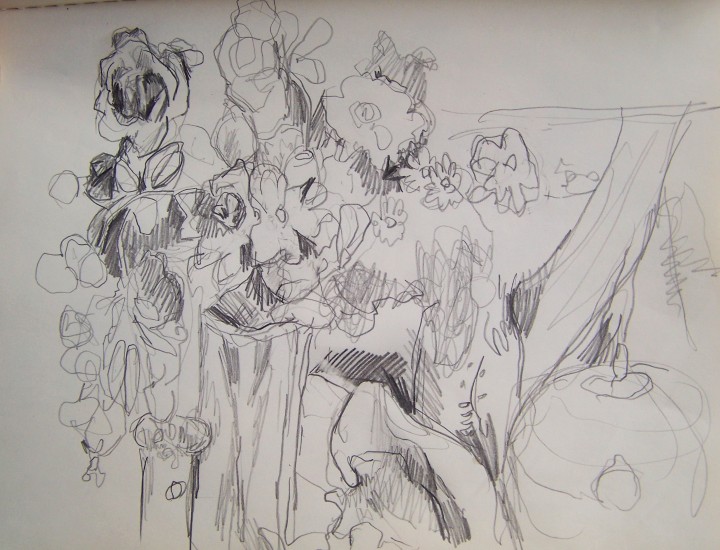 Loosen up, a little more shuffle this time.  Put some fun into it.  Let the pencil wander around.  Draw wherever the eyes glance. 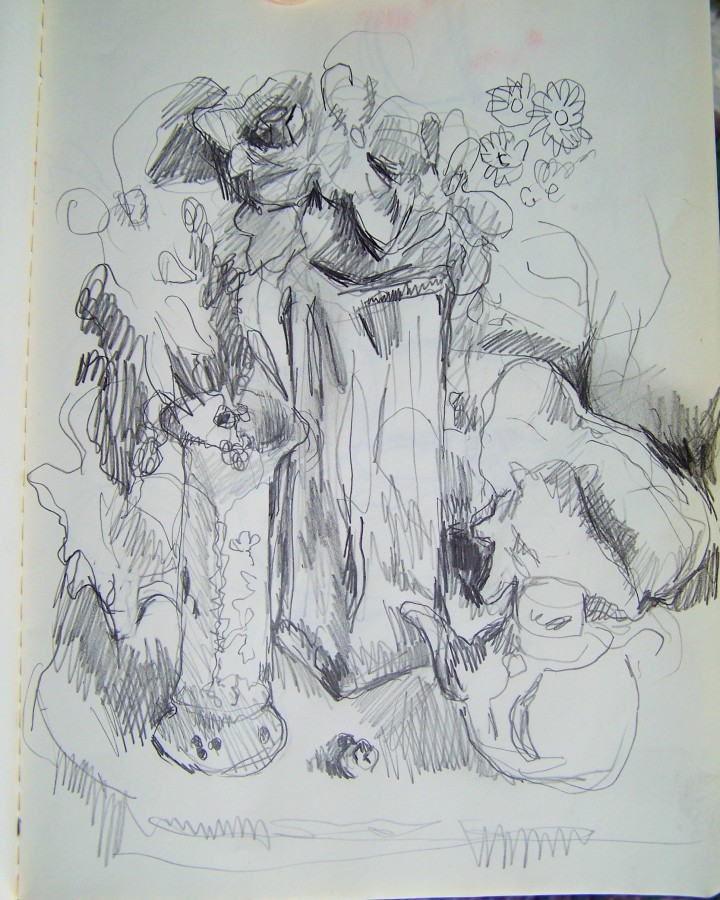 Outside the dentist’s office I decided to begin a drawing that was a composite based on the morning’s warm-up drawings.  So sitting in the car for about 15 minutes, I began my composite drawing in a different notebook.  (More on that in a minute.)

Time to go inside.  While in the waiting room, I pull out a little notebook and draw the set up from memory (while the memory of the drawings is vividly in my thoughts).  That, below: 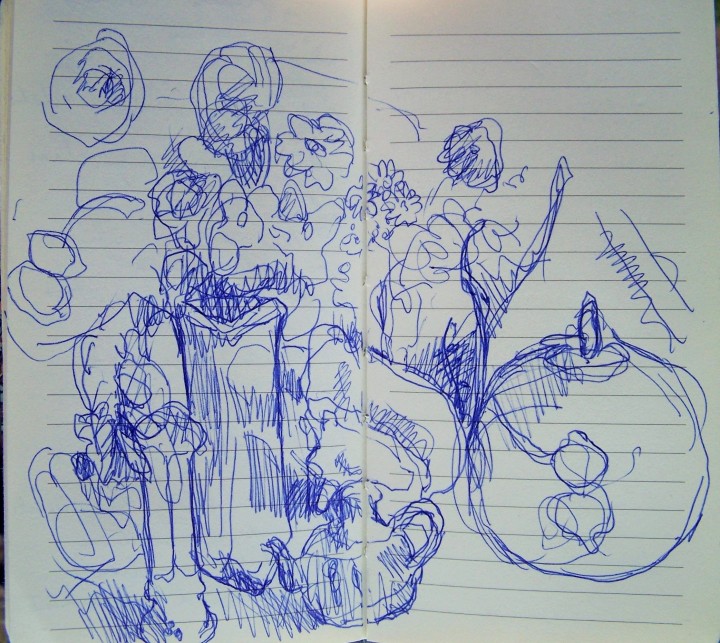 They call my name.  Into the chair.  Clean, examine, chat-with-the-dentist.

Later in the evening, while waiting again on another not-art mission, again in the car, I resume and finish my composite drawing: 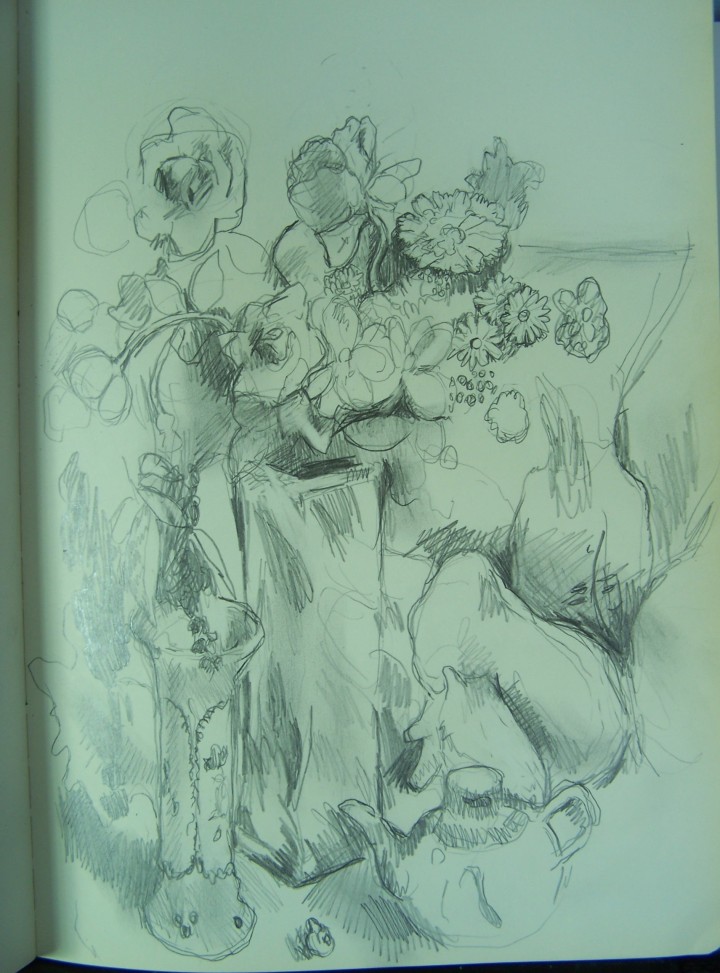 The composite drawing experience is interesting because it shows me something new about where my attention was.  Since the composite relies on information contained in the drawings I made from the set-up, I can only include things that were depicted — even if only very sparely hinted by an empty oval.  If I didn’t draw the feature while looking at the set-up, I find it’s usually absent from the composite since my memory is strongest for the things I drew, not just the things I saw or the things that were there.  So, voila! now I have questions to take back to the set-up. I want to return to draw the things/areas/passages that I omitted earlier — those things that didn’t grab my attention on the first go round. Those mysterious lacunae, cha cha cha.

There’s so many ways to watch the world even when “the world” is the theatre of the still life table.  And even a trip to the dentist can become part of the adventure, another step in the dance.