With a very specific goal in mind, I began

attending a drawing group a couple weeks ago, and I set myself the task of drawing heads. They will be always larger than life size and always in pastel. Moreover, my idea is to use color to understand the forms — even arbitrary color.

I got the idea when my daughter was attending a portrait drawing workshop taught by Teresa Oaxaca. Whether it was by instruction or happenstance, all the participants produced charcoal drawings that were either life size or larger — many were larger. Their method if I understand it correctly (I only saw the drawings during their breaks and wasn’t privy to the conversations that took place) was to conceive the head in terms of light and dark. The model was strongly lit from one side so that many of the heads had a cast shadow of the chin raking across the shoulders.

Looking at the several drawings, an idea popped into my head: “what if the shadow, instead of being dark, was pale violet?” And in my mind I could see a kind of pale violet such as you often find in Bonnard’s palette. 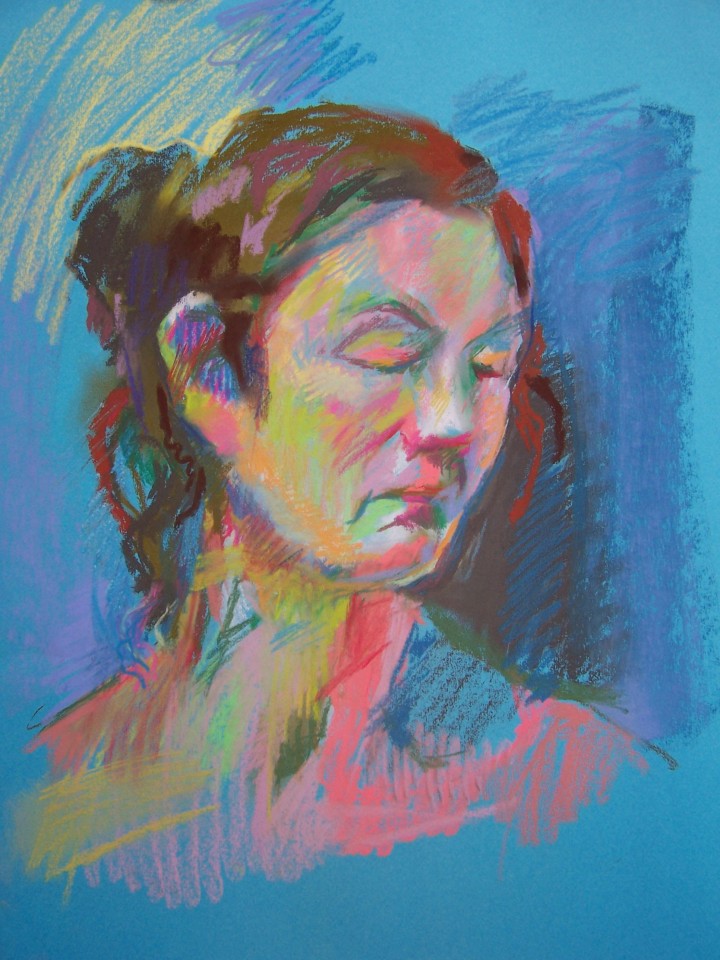 Influenced by Fauvisme, I decided to use color somewhat arbitrarily in the ways that Matisse, Bonnard, Diebenkorn and others used color.  Thus I make these images fairly rapidly and instinctively.  There’s much information to process. I see many things I want to record so I just point and shoot. The goal is not to produce a likeness, but to capture as accurately as I can some of the visual incident that catches my notice — however, I am also running the ideas through this mental lens of exaggerated color.  See something, draw it in the manner that you think about it.  So my pictures begin in odd ways and follow no logic per se except that of my attention.  Whatever I notice first, I begin drawing first.

I discovered afterwards, though, that some priorities govern my choices.  The first priority is color. I choose the colors to relate to something I’m seeing, though the relationship is not literal — not local color.  Sometimes the warmth or coolness of the color relates it to formal aspects of the figure, to whether something comes forward or recedes in space. Sometimes the color relates tonally, but not chromatically to what I’m seeing.

Sometimes the color is a whim, a feeling, a hunch. On the whole, I choose color over tone. Next in priority is line when something linear strikes me as especially intriguing and lastly tone for the sake of the form — in that order.  More or less.

I have no idea where it will go.  And I like that too. When I’m there, actually drawing, I do very little evaluation of the image. Mostly I react to what I see.  And thoughts about the resulting images are something I leave for later on — for some future meditative moment.

Yesterday the session was all short poses so I never made a large pastel.

These short drawings are on small sheets or in a notebook. The sheets are about as large as regular photo copier paper.

This last drawing is a rapid sketch using oil pastel.

4 thoughts on “Head seen through color”