I’m not sure where the idea came from.

It seemed just to have arrived. Maybe I was thinking about this picture more than I knew because there’s something about it that I like, that keeps pulling me back.

I decided to put the two drawings together.  That was the idea. Put the window with the twilight effect behind the flowers on the table. The decision definitely connects the picture further to Bonnard, and that’s what I want.

I couldn’t find the drawing of the window. I had it just the other day. It sat on top of the pile, but I rearranged things and now the pile is gone, and  I don’t know where it is. But I have been able to make a first sketch of the idea by retrieving the copy I posted on this blog. 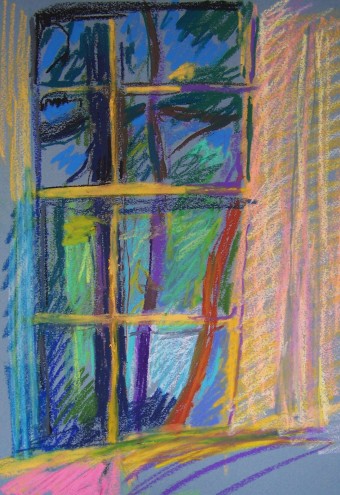 I arranged them on the computer screen so I could see them both simultaneously rather like the way they’re displayed here.

Formerly the two things had nothing to do with each other. Now they feel intentionally connected. What luck that I even made the drawing of the window. It had been a whimsical gesture at the time. I had been working in the studio all afternoon. As I was finishing up, I noticed how the light inside the room contrasted with the cool evening light outside as twilight descended. It’s an effect that I always love to see.

I hesitated to draw the scene since it would dissolve so quickly.  I only made the drawing on a kind of dare to myself. What was there to lose? Isn’t that why you learn to draw? To tackle the dissolving, transitory motif, to see how much you can grab before it’s gone? Why not sometimes just swat at scenes, see what you get. So I picked up the nearest sheet and the most ready box of pastels and began drawing very fast. I didn’t even know how much of what I was looking at was “the motif.” There’s just me looking up, seeing colors and finding that I want to stop everything I’m doing to look at them.

After seeing that the window could be joined to the table top motif,  I began to see various ways I could figure out the rest of the painting, too. One idea seems to flow from the others. Why not take the scene apart thing by thing?

The bowl of apples, for instance — should it hold apples? If so, why three? Should they be arranged this way or some other way?  Why not begin some studies and figure it out? I can go through the whole picture this way, making inquiries of each thing.

The drawing of the compotier that I love also makes me believe it would be good to put different arrangements of fruit in the bowl. This drawing, below —

Meanwhile, why is the owl there? He has always struck me as being the feature that makes the picture look a bit clunky, but maybe he’s there for a reason? Making more drawings can help me sort out the questions. Can he be a more serious owl?

I’m starting to feel pulled into this project again. That’s a good thing.

UPDATE:  Here’s another thought for this painting, a shell motif in the curtain.

UPDATE:  Just realizing now how different the relationship of the flowers to the window is in the new idea.  The scale is utterly different.  I like this relationship better than the one I began with — so use it going forward.  Let the composition at the top be the guide.

4 thoughts on “the window at twilight”