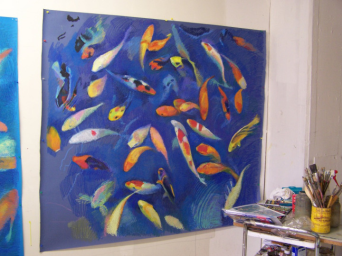 One of the ways that I get ideas for new works is from chance occurrence. While I was looking through image files, I found these two pictures side by side — rather as they appear here.  The image on the left is a notebook drawing of the koi.  The picture on the right is a scene from an old studio where a large drawing was nearly complete.

Seeing the two works together like this, the one on the left could almost seem to be the same size as the one on the right — and that gives you an idea how it would look enlarged.  Making large works is not merely about enlarging small works.  The large picture ought to seem as though it is simply “the right size” but seeing this small drawing in this context does suggest that it might look good on a much larger scale.

The process could as easily work the other way.  You could see some huge painting in a museum and realize that it offers you a subject that you could do on a smaller scale.  The key, whatever the circumstance, is to be open to new ideas.