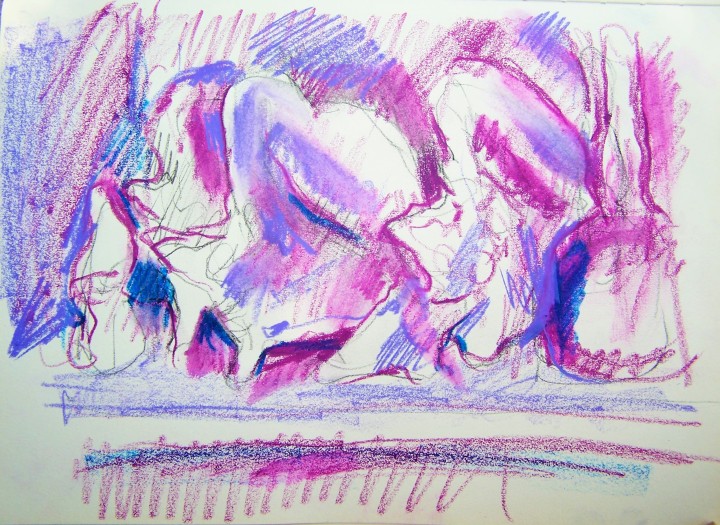 House cleaning changes have exposed these still life items once again, which were formerly behind a humongous, large board that held a large drawing.  Now that I can see them again, I want to draw them again.  I had begun by merely storing them, but discovered they make a nice still life in that arrangement — until the clutter had hidden them, buried beneath the layers of good intentions, as sealed away as a mummy in King Tut’s tomb.

I feel like an archaeologist.  House keeping does that to you when you have neglected it for too long.

There’s a kind of drawing where you just talk to yourself.  People learning to draw get hemmed in, sometimes, in believing that the drawing has to represent the whole whatever-it-is.  But I always sought my advice from the old masters and in their drawings, the old masters often studied certain qualities of a scene while ignoring others. Drawing was frequently used as a tool rather than as an end in itself.  It’s purpose was to gather visual information for paintings.  Some drawings are very fragmentary.

And I seek to do that here. Except this drawing is more fundamental still. I haven’t seen the still life in a while. I look at it and feel rushed. It’s as though I need to draw all of it quickly.  So I tell myself what shapes things are (or seem to be).  I realize that the first contours get the proportions wrong, I draw over top them.  I realize that the sizes of the shells don’t match up relative to each other.  More drawing over. I look at the light/dark pattern — “how can I simplify it?”

I tell myself, “it’s dark back there.”  Do I have to describe in minute detail how dark exactly?  Of course not.

It’s just one drawing.  It’s a mood as much as a drawing.  I feel in such a rush.  Been reading a book on mindfulness too.  So, okay, I am noticing that I feel in a rush.  So I hurried.  Maybe the shells will move.  Maybe the big drawing will jump back in front of the still life and obscure it again.  I have so many things to do. Hurry, hurry, hurry.

Whatever.  If life seems to rush you along, as an artist, then just draw faster. Not always, not everyday, but simply now that you feel rushed.  It gets you to draw fast — which is a useful tool also.  Draw fast before everything changes!

Sometimes the voice says “this is in front of that.”  “The pointy end of the shell sticks out about this far.”  “It lines up with the other shell’s bottom edge, here.”  Listening to myself think, I slow down a little.

Later you can draw slowly.  Once you calm down.