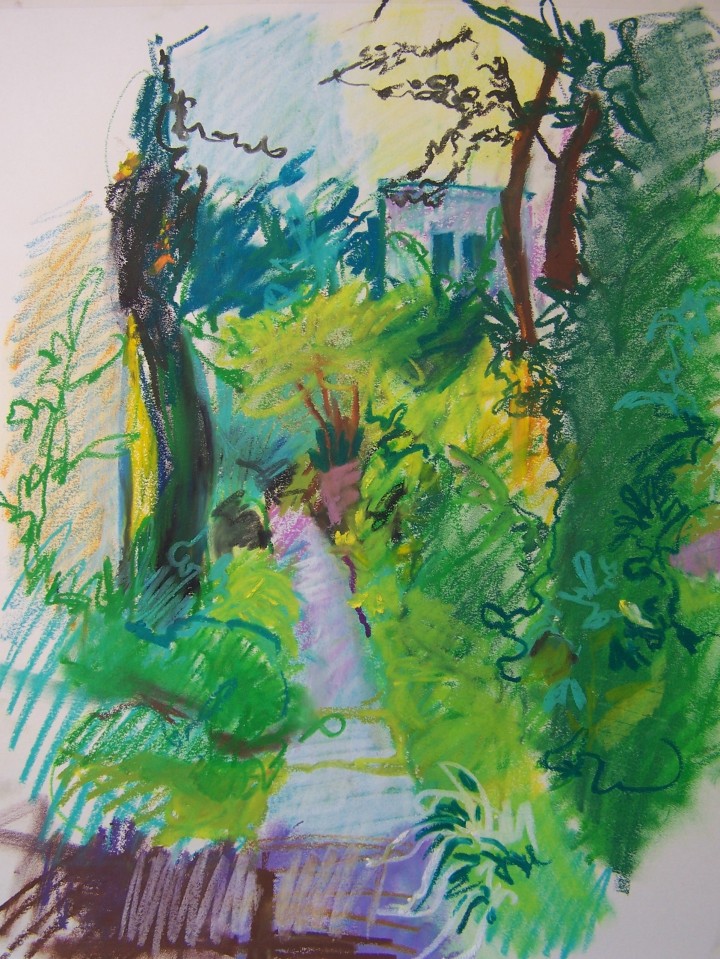 I have an idea for a project.  On one of my walks I saw a garden that reminded me of my idea, so when I could, I visited the place and made this quick sketch using oil pastel.

Actually it looks nothing like my idea, but ideas are like that — they tend to occur in your head and sometimes bear only fleeting resemblances to particular things that recall them to memory.  So this drawing doesn’t look like my idea though it does bear a sketchy resemblance to the actual place I visited.

Nonetheless I trust the drawing to connect me to my idea in ways I cannot fathom. While your hand records the forms, that invisible link etches deeper into the silent mind.

I have decided to go out into the field as often as my schedule permits to make drawings that relate to ideas, ones that have been rattling around in my head.  Drawing is a form of research. Even when the drawing doesn’t look like the idea there will be some kinship, some je ne sais quoi that connects to the hidden motives that had called me to the place.  If I draw the locale more times, the connection might grow clearer.  It was pleasant being there — having to think on my feet, experiencing all the sensations of the motif — not just its look, but the air, the sounds, the breeze, the pull of gravity, the fatigue of standing and passage of time in the changing of the light.

So these are episodes of brainstorming.  I make the drawing to call back to the idea, and perhaps it will call me again in echo.

8 thoughts on “in the open”