The objects on the table would appear — I think — at slightly varying angles.  In Bonnard’s painting La salle à manger sur le jardin which this painting emulates, one comes upon the table as though standing in the room so that objects on the table are slightly below you.  In my painting, by contrast, the compotier and certain various other objects are not really sitting on the same plane.  And I guess I shouldn’t write that in my blog post because perhaps some observers wouldn’t notice unless one draws attention to it.

I am not being literal, though, about the objects.  The compotier has to be seen slightly from above or it looks wrong.  In contrast I think seeing the bottom level of objects in profile just somehow feels right.  So I’m going with my artistic intuition rather than attempting to assemble these things in true space.

When you walk into a room you look around, and you move through the space yourself.  This painting is large enough that it benefits from having a mobile quality.  So the objects sit in ways that perhaps relate to their being noticed at different points in time.

Below, my painting in progress on the left and its mentor by Pierre Bonnard on the right. 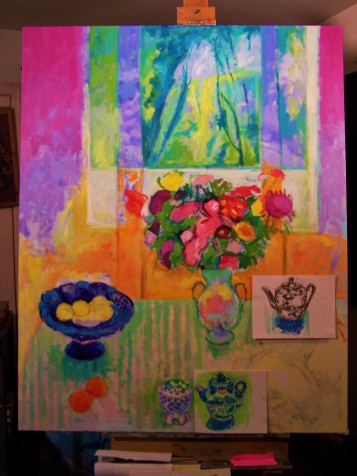 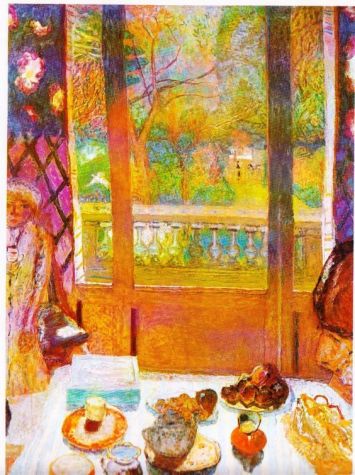