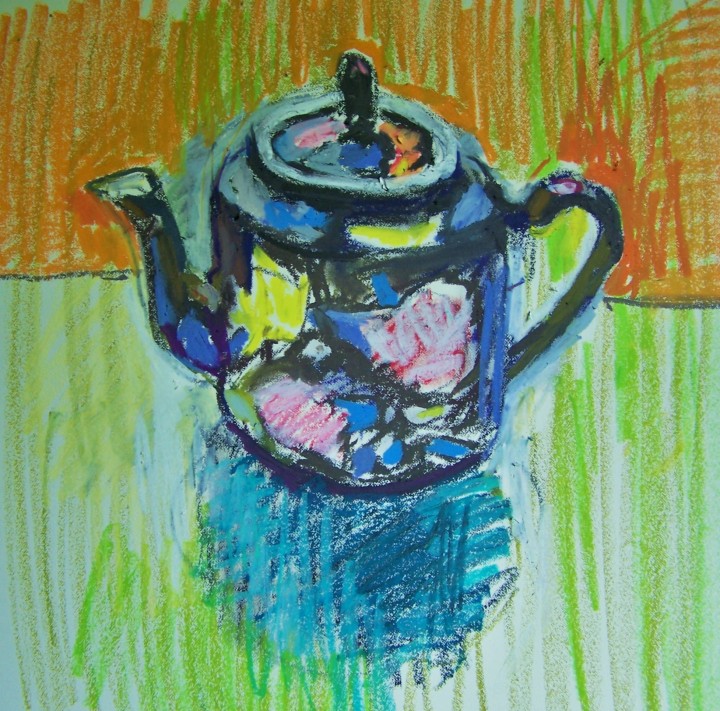 I made another drawing of the black teapot that sits on the horizon of the still life table.  I decided that maybe the ellipse does matter after all so I redrew it to better match the appearance of the blue compotier. 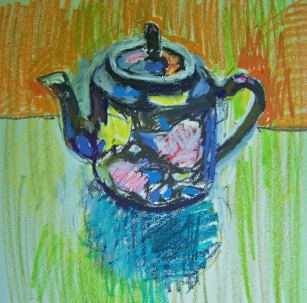 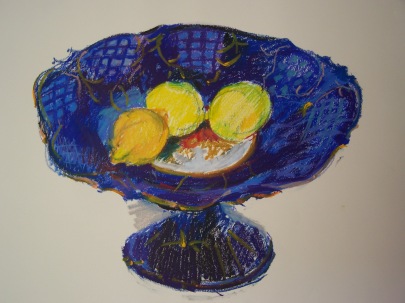 I included a shadow.  Things are going to have cast shadows similar to the ones that objects have in Bonnard’s painting though not all the objects have shadows yet in the various studies.  The question of the shadows and what they shall look like is another piece of the big puzzle. Sorting through the studies for the painting, I find bits that particularly intrigue me.  One of these bits is that passage where a portion of the blue jay figurine is visible through the handle of the frog teapot.  I love passages like that in art and in life.  When I was drawing it — strange as it may seem — I thought this particular passage was so marvelous — in the actual things. Such passages as possibilities in a canvas measuring 60 x 48 inches are somewhat staggering to contemplate (122 x 152 cm).  But it doesn’t bother me.  It’s not goading like the question of what things mean is goading.  It’s a grand opportunity for pleasure.  It’s like ranging through a large meadow every square foot of which is filled with wild flowers.  The potentials for pleasure are immense.

I think I am basically an abstract painter at heart.  I just need things about which to be abstract.  Perhaps there’s a measure of abstraction in the things also — or in their meanings — in meaning generally.  Maybe meaning can be more flexible and capacious than I realize. The peonies are the latest among the grocery store flowers.  They started opening last night. I don’t have specific plans for them so I will either paint or draw them later just to have some flower images for future use.

I have been contemplating the next stage of the Big Painting, the otherwise nameless painting of the moment. I continue making studies of individual objects or objects in groups as I sort out the placement of the things that will sit on the table.  The questions are visual for the moment — what shapes, what relationships between objects, how their placement will affect the rest of the painting, etc.

But I am also wondering what it all means.  That’s a sticky question and bothers me a little bit.  I chose things for their appearances because I like the way they look.  Contemplating their appearance is very appealing — shapes, color relationships, drawing.  The hope is that the spectator will find them equally intriguing — or will find their portrayal intriguing.  Portrayal and existence are different things.

But what if everything does mean something? Then what?  Am I supposed to know the meaning of a blue jay figurine, a dark blue compotier with lemons, two oranges, a large bouquet of flowers, a smaller bouquet of flowers, two teapots (but no teacups?), a seashell ….?  If the objects introduce into the painting a bird and a couple frogs — indirectly — what is the consequence?  Then there are the flowers in the vase verses the flowers on the vase.  And the table sits in front of a window with a view of some trees whose antecedents were growing by a gorge at Glen Echo.  Does the “echo” of Glen Echo enter in?  Particularly since the appearance of the trees tells nothing of consequence about their actual location on the planet. Or did the echo sneak in somehow?

Of course the whole thing refers back to Pierre Bonnard’s painting.  I wonder what his painting meant and why I love it so much?

Truly painting is like a dream and can be difficult to decipher. 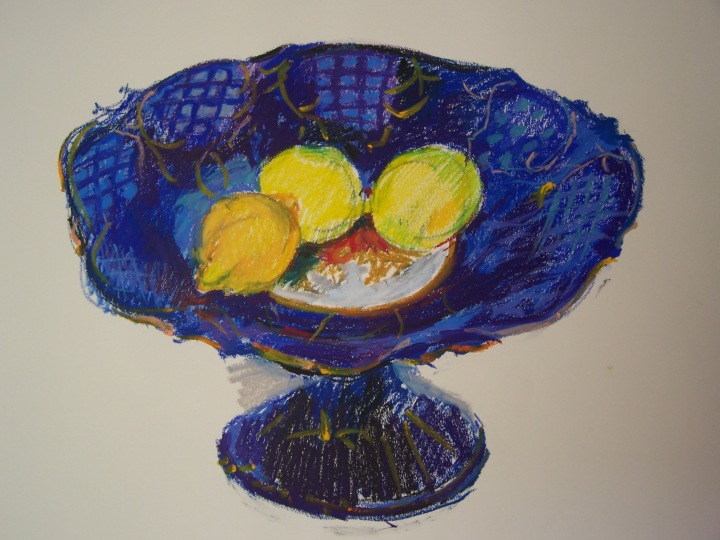 The dark blue compotier has been the subject of many drawings lately — this because it occupies such a prominent place in the Big Painting that’s in the works.  However, I wasn’t aware how much I’ve drawn it.  I think I must be drawing it in my sleep, too.  It seems to border on obsession!

Well, I suppose there are worse things to be obsessed about …. 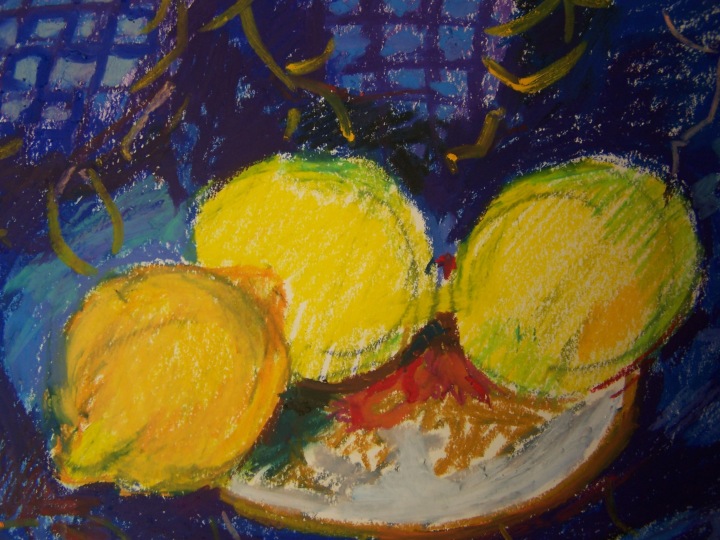 I love the lattice work in this object.  It totally fascinates me.  I particularly love it in the form of a cast shadow, but the light wasn’t coming from the right direction in the latest drawings to observe the shadows.  In the drawing at the top, of which the above is a detail, the widest part of the basin measures 15 inches across which is two inches wider than the actual object. 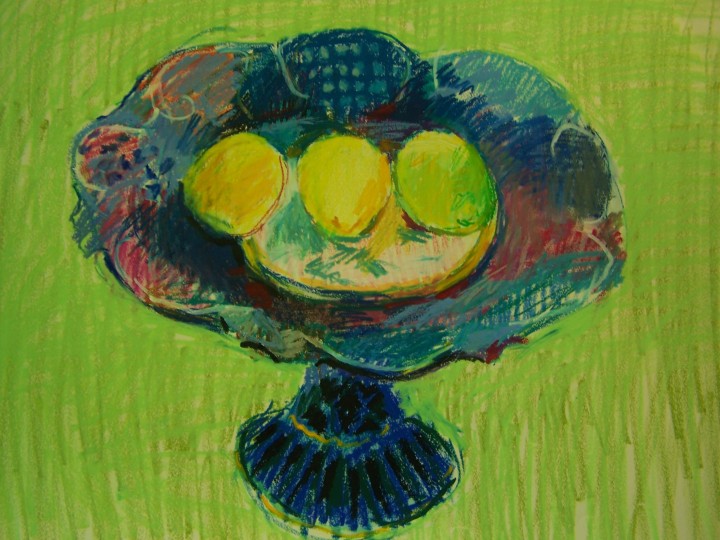 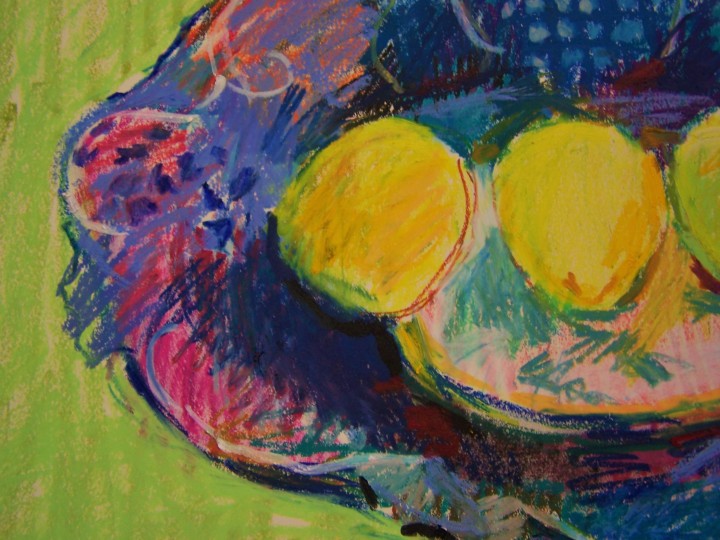 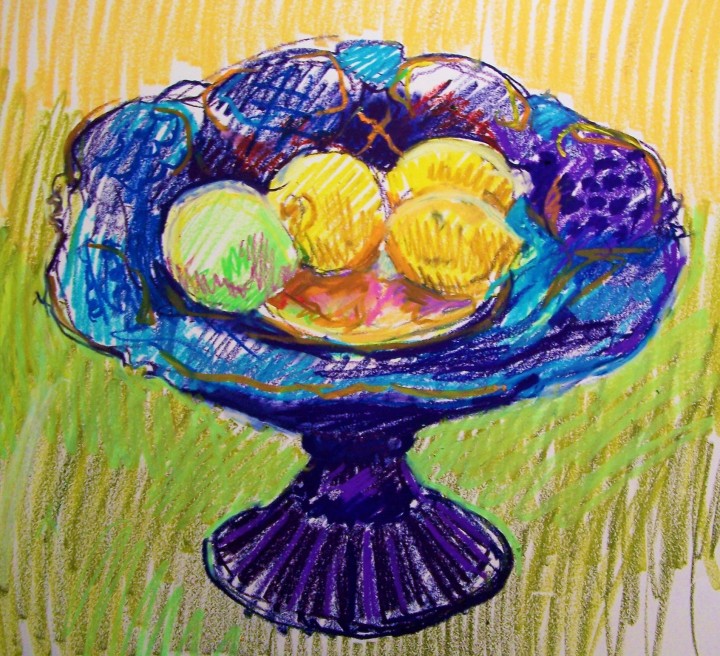 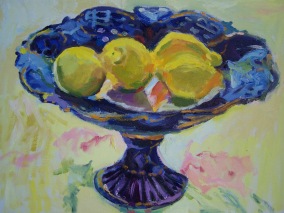 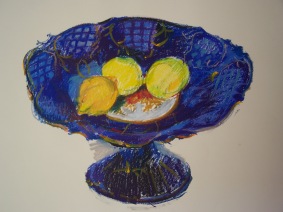 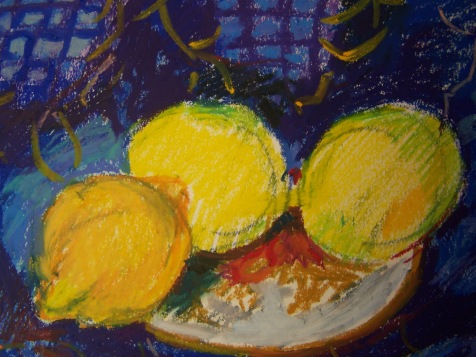 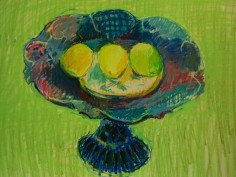 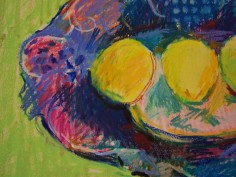 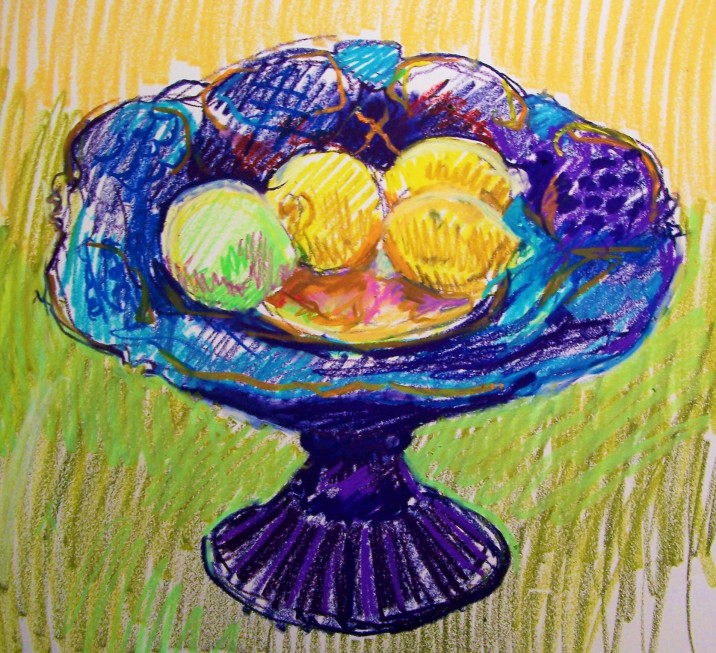