In chronicling the creation of “the Big Painting” (eventually it’s going to get a name) I earnestly wish to portray the process accurately.  Much of the work on this project is really fun.  I love doing studies, for instance.  All the individual drawings of things using Neopastels I find enjoyable. All this observation has a direct bearing on the outcome. The sense of anticipation spurs me onward.  It gives me practice portraying the forms.  It provides very creative, spirited forms of rehearsal.  I love getting to know the objects, seeing and recording effects of color and form.

But not every facet of decision making is bright.  Perhaps the hardest element so far has been trying to figure out where the objects will go.  I hesitate to begin drawing the objects on the actual canvas because I want to limit the amount of pentimenti.  After all, there’s already the outlines of a different motif on the canvas (originally it was going to be a large koi painting).  I can make some changes after the painting begins, but clearly there’s little benefit in having to do a lot of repainting or over-painting.

Solving the problem of the objects takes different forms.  I have in previous posts shared color studies that included two or more of the objects in relationship.  That helps.  But I’m also trying to envision the whole and I don’t have an actual scene to which I can refer.  I have set up, as best I can, a few facsimiles.  But some of the solution has to be imagined.  So I make some drawings like the one above. 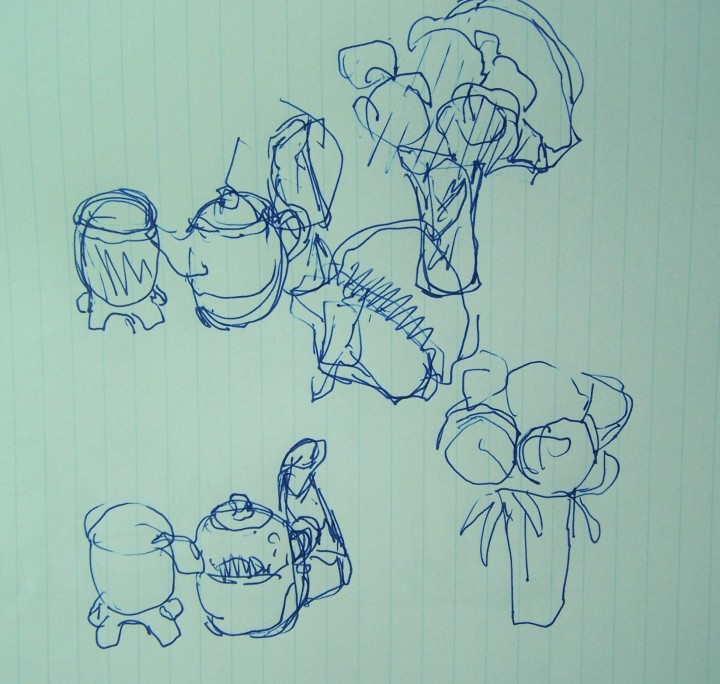 They are “thinking out loud” drawings.  Sometimes I enjoy doing this sort of drawing.  Sometimes I don’t.  Since I am so flummoxed about the disposition of these still life items, I have found the compositional drawings less fun to make. These particular sketches are made imaginatively.  I’m not looking at the real objects, I’m looking at a mental idea of the table.  They reflect my indecision. 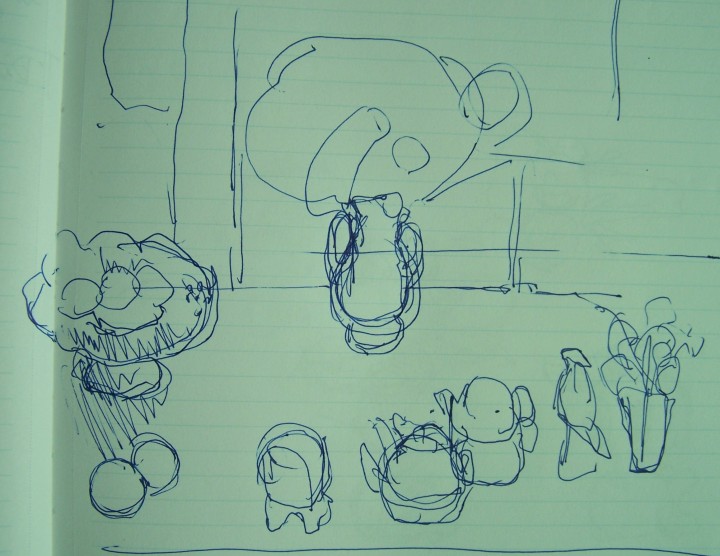 Indeed, they’re kind of boring.  But I chide myself that I have not made more of them.  So the point is that sometimes some aspects of art are just that — boring.  However, it’s like doing your homework in school.  You just have to do it.  Sometimes it feels like it’s going nowhere, but you have to do it anyway.

When you find that by surprise — at some happy future moment — you are somewhere again, well, I think the boring stuff will deserve some credit for having got you there.

Here’s one of the several make-shift set ups, below: 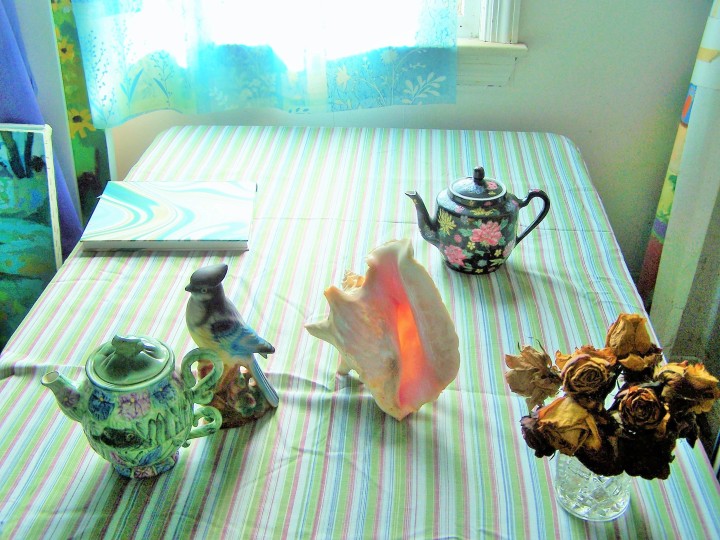 If you’re just landing on the blog now, the chronicle of The Big Painting begins approximately here: