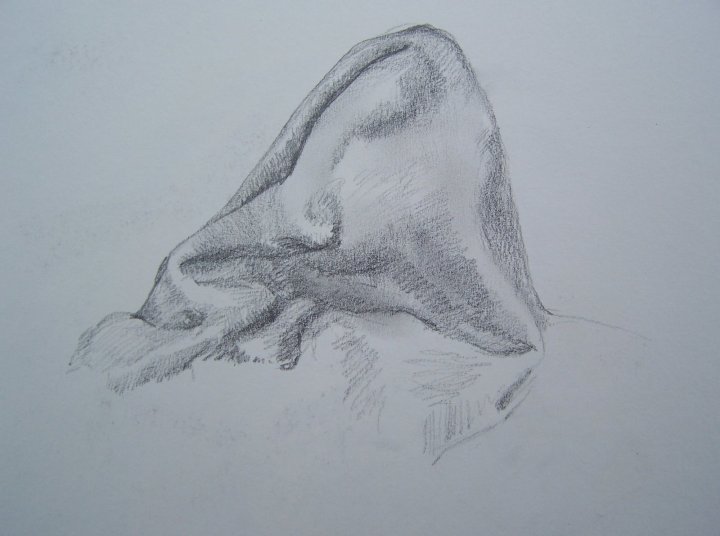 When you need something to draw, you can always try punching a pillow.  It worked for Durer.  He punched a pillow and drew it.  Punched it again and drew that.  They made charming drapery studies.

If you compare the still lifes of Cezanne with their heaped up folds to his landscapes of Mont Sainte Victoire it soon becomes obvious that the two have much in common.  Cezanne’s still lifes and his pictures of the mountain are versions of the same idea.

Sometimes I go on a drapery spree and make oodles of drawings of drapery.  Drapery turns out to be very expressive.  It’s filled with moods — like clouds.  No psychological depths exist that cannot be summed up in some manner by folded textile.

Even now revisiting my drawings made after Picasso’s Corina Romeu, I have to admit how much her hair is like this drapery study above.  And it is not just a consequence of my personality and my drawing.  It was in Picasso’s version too.  He was just as much swayed by the effects of gravity upon cloth in shaping ideas of dimension and form.

It all started with the Greeks.  They really were onto something. 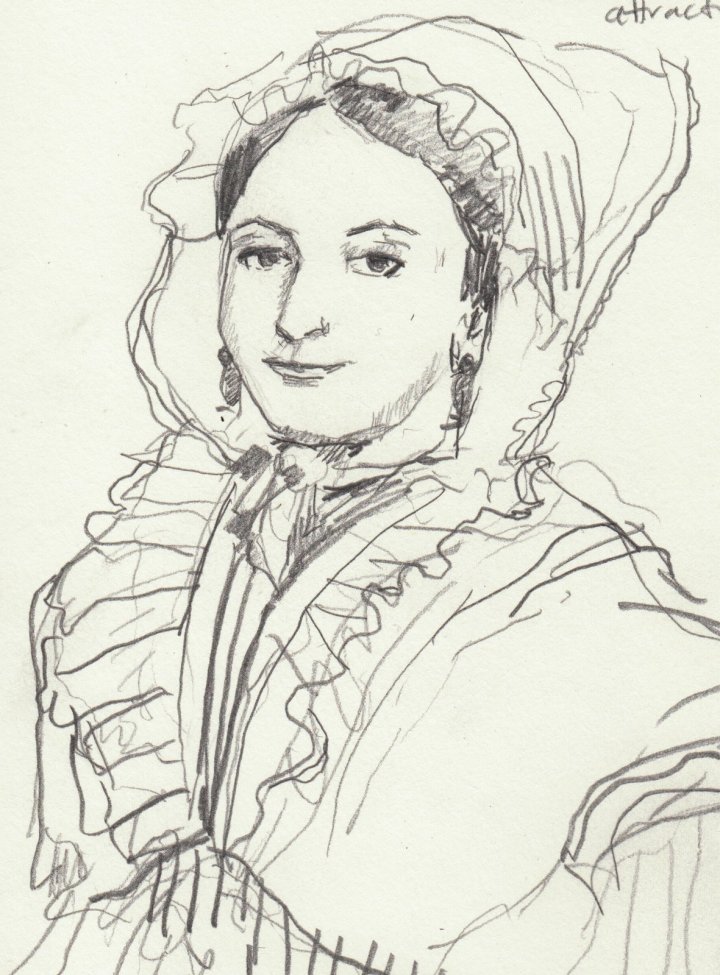 Here’s a drawing after an Ingres portrait by Kirstin Lamb.  Her copy has become an entirely new image, quite in its own right, with wonderfully loose lines and frank directness.   It’s certainly fun for me finding it and being able to demonstrate someone else’s use of copies.  You discover how fully inventive Lamb’s copy after Ingres is by comparing it with its original.  Mrs. Hayard has had a good make-over, as a consequence becoming a thoroughly modern Millie.

[Top of the post:  Copy at Ingres’s Madame Charles Hayard, by Kristin Lamb] 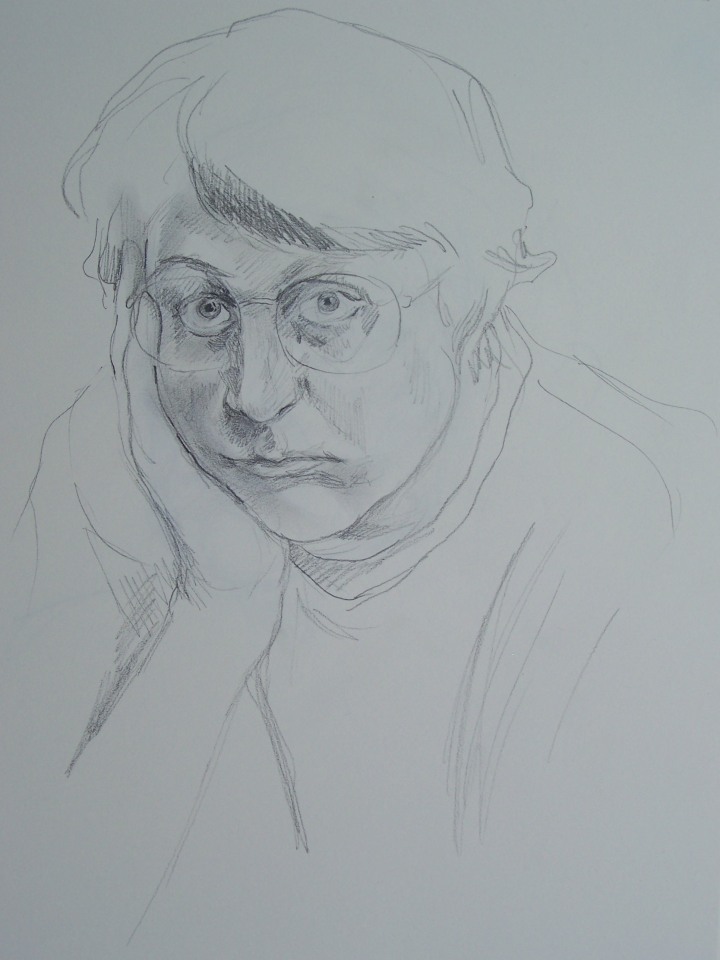 I’ve been pouring through notebooks looking for drawings to post.  This is a self-portrait from a few years ago.  However, I don’t look like this.  I don’t think I looked like this then either.  Perhaps on a really bad day, I bear some resemblance to this if I am having a serious state of the blahs.  Even now, in the grip of my cold, I look much better.  It matters not.

Indeed, I post this as an example of the virtues of self-portraiture, benefits that transcend likeness.  You can use yourself to try out ideas, to make emotional statements —  or just to model funny hats — it worked for Rembrandt  (though I prefer to use squirrels for that).  The drawing doesn’t have to look like you to be a provocative drawing.  It just has to be what it is.  And it communicates what it will.

What I like about this drawing, though (and what I hope it reveals about me) is its economy of line.  That constitutes (I hope) my “portrait” in it.  Like the line that describes the top of my head — that’s got some punch.  It’s bold drawing.  (One wants to be bold.)

[Top of the post:  Self-portrait in the pose of Melancholia, by Aletha Kuschan] 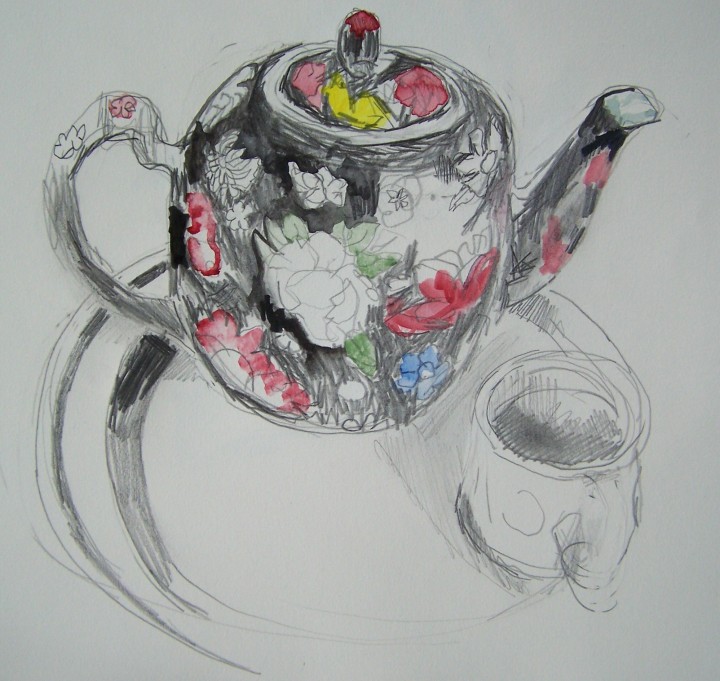 It’s like writing a “to do” list for yourself.  It’s like quick catching a first impression.  It’s a form of play.  You create your own coloring book drawing, rapid-fire lines that you fill with color — or that you leave empty — it doesn’t matter.

It’s really not a big deal.  That’s a kind of drawing, too.  I drew this tea pot as casually as I would drink the tea.

[Top of the post:  Tea pot and Cup, by Aletha Kuschan, pencil and watercolor]

When I was working on one of the commissioned pictures I alluded to earlier, I made numerous studies of individual parts; and in the process of drawing and redrawing the face of one of the figures I was painting, I began more and more to identify with her.  She became for me like a character in a story.  As a novelist learns to watch the people in her fictional world, I began to “watch” this woman I was drawing, and I tried to figure her out. Or, like an actress learning a part, I tried to learn who she was merely by prolonged peering into her face.

I had a group of photographs to work from, and one photo was the pivotal one.  I redrew this photo several times.  And each drawing was a little different from the others.  Sometimes artists worry about the differences between what they are seeing and what they produce in their drawing.  But I liked and sought subtle differences from the photo.

The photographic image never changed, but my drawings did.  Even though they captured the general likeness of the photo, the act of drawing brought out various little bits of expression and emotion and thought.  For me, it animated her photograph.  I felt like I had drawn the woman herself — from life — rather than having just copied something static.  Looking at this, I don’t think anyone could tell she wasn’t there in front of me though she had died a decade earlier.

[Top of the post:  Study for a Portrait, by Aletha Kuschan, pencil drawing] 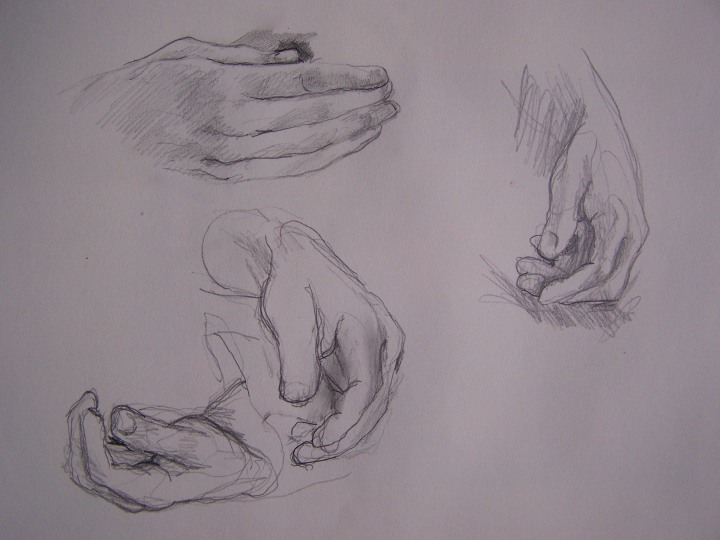 Would that I’d had a model, but I couldn’t afford to hire someone.  So, I became my own model for hands too.  I sometimes used a mirror and sometimes photographs.  Regarding these drawings, I don’t post them as exemplary of good drawing, but as instances of everyday ideas being tried like scales and riffs on an instrument.  They were casually and quickly made.  And they, too, offered me freedom.

I was painting a commission, the kind of thing that pays bills.  But in the studies, I could explore ideas.

[Top of the post:  My hands, by Aletha Kuschan, pencil] 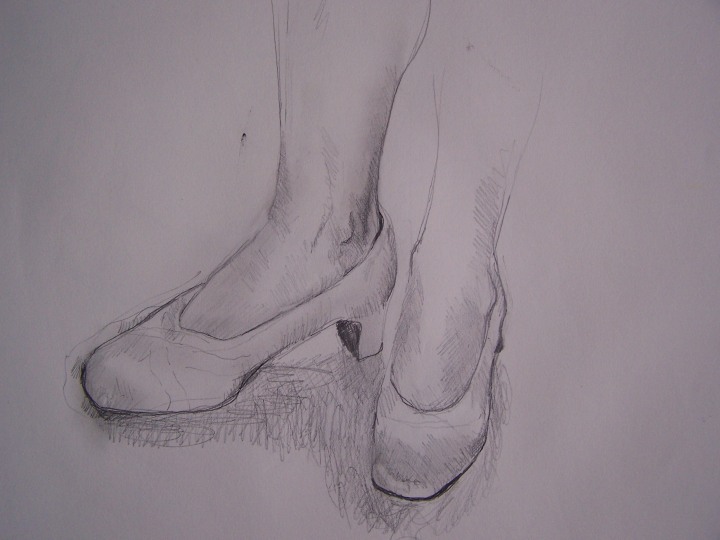 Art happens as a consequence of many small decisions laid out over many days and years.  I was doing a historical portrait for a commission and needed some feet for one of the subjects so I became my own model.  This isn’t the only drawing I made of me wearing my nice shoes.

This was actually very enjoyable to draw, too.  I found freedom in the drawing that wasn’t available in the commission (for fairly obvious reasons).

I think the shadow served to give me some ground to stand on.  That’s always a good thing to have when dealing with feet and shoes.

[Top of the posts:  Drawing of My Taupe colored Pumps, by Aletha Kuschan, pencil] 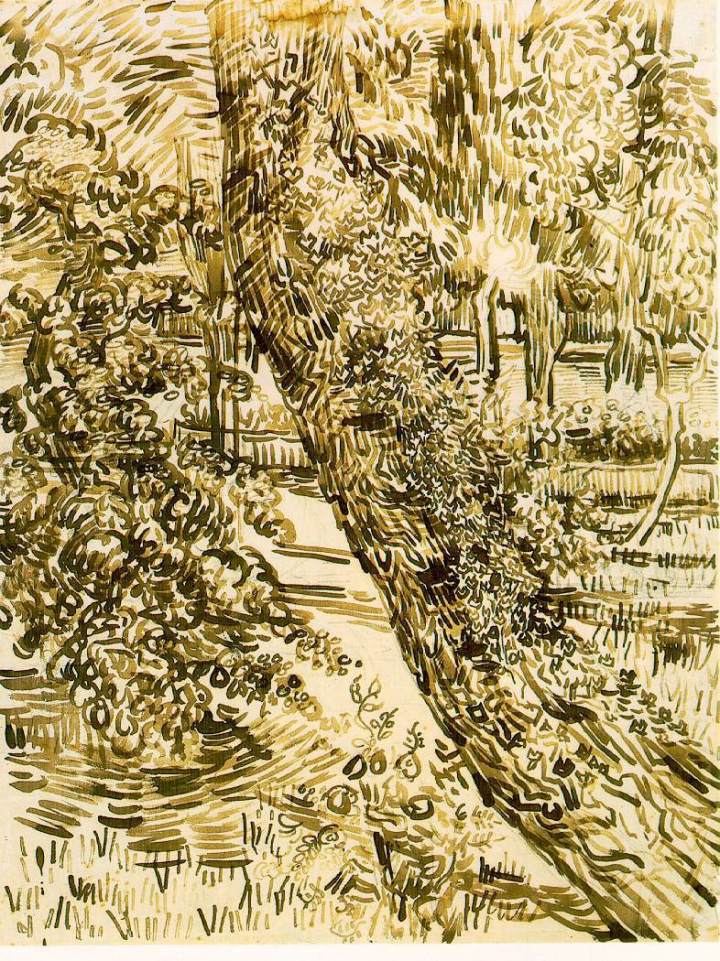 He wrote innumerable, wonderful letters to his brother and to various friends in French, Dutch and English.

Meanwhile you can find the image above and other equally wonderful ones at artlex.

UPDATE:  You can find a blog of Van Gogh Letters here.

HERE’S: a scholarly internet site with the complete letters 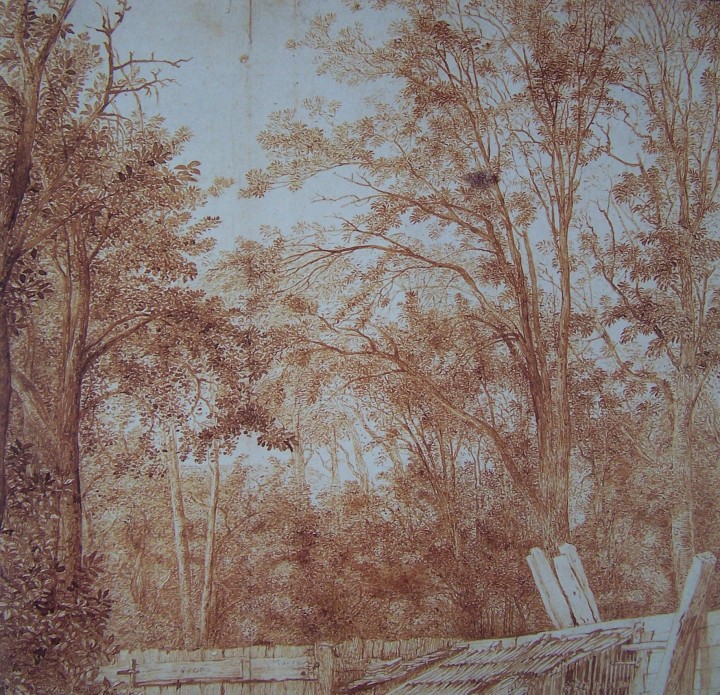 Reader comments help me greatly to clarify my ideas, and I thank everyone who leaves comments here.  In my previous post about the education of a hypothetical “great artist,” I argue that the most authentic form of art comes from the self.  Moreover, I argued that for this reason, the greatest artists — regardless how much education they had — were, in very important ways, “autodidacts.”

Perhaps I made it sound like an aspiring great artist should avoid schools, books, conversation and study.  So, I want to clarify the idea by saying that, quite the contrary, I’m aware that great artists typically had very thorough and deep educations.  Sometimes they had, like Rubens, a rich formal education.  Rubens’s education in rhetoric, history, language as well as his “internship” with the Carracci brothers in Italy made him a thousand-fold more savvy than the typical, much touted “New York” artist of today.  Monet, to cite a different kind of career, was certainly well acquainted the great paintings of the Louvre and with the main tenets of academic art of his era and had innumerable painter friends of all sorts.

Van Gogh who I had used as a role model of the perfect sort of autodidact did literally isolate himself and set to work learning to draw through sheer hard work and struggle.  But even Van Gogh had a direct “teacher” in the form of a drawing manual, one that was popular in his day by Charles Bargue.  But what distinquishes Van Gogh’s studies from the norm is the keen force of his personality.

Van Gogh was well acquainted with art prior to his decision to become an artist.  He had worked as an art dealer, following in that a family tradition.  He had been a passionate visitor of museums.  He was deeply influenced by a wide number of artists and traditions.  While it is most unlikely that Van Gogh could have known the particular drawing at the top of this post, by Cornelis Hendricksz Vroom of 17th century Haarlem, Van Gogh was nonetheless probably deeply influenced by the tradition of which Vroom was part.  And for a modern viewer, well acquainted with the masterful graphic vocabulary that Van Gogh uses in his late drawings — all the dots and dashes and wonderfully expressive penlines of every sort — seeing this drawing by Vroom is a little like finding Van Gogh’s 17th century twin.

There are as many paths to art as there are travelers, but upon each path the person taking the journey has to find a spiritual compass within his or her own life.  Yes, an artist should study assiduously!  Certainly, a serious artist is very eager to learn and to see.  But the finding is certified not by outside authorities, but by the quiet, sure judgement of the self.

The Vroom drawing above belongs to the Albertina Museum which is in the process of putting images of its entire collection on line.  Its addition makes another wonderful resource of ideas for today’s artists. 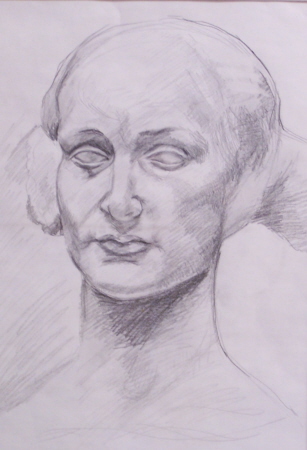 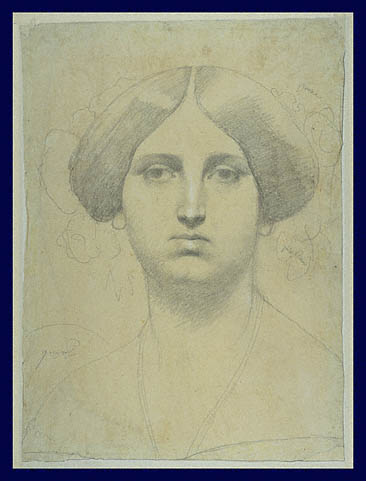 I made the drawing at the top after a Renaissance sculpture at the National Gallery.  The drawing below it is one of Ingres’s studies for Mme Moitessier.  I’d like to think there’s a little bit of family resemblance.  (Ingres is my hero.)