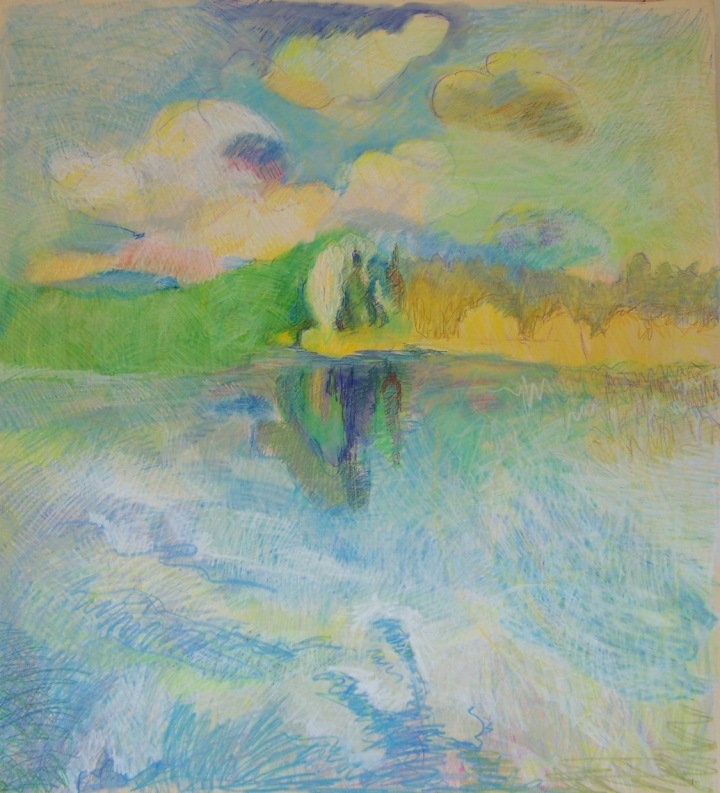 Why are you attracted to one object and not another?  One sight catches your attention, and something else passes by you as though it were invisible.  I have never known why I paint and draw water.  I love the color blue.  Blue has its own built in mysteries, quite apart from what it attaches to.  It is the color of the sky, and it pulls us into a sky hidden inside the heart.  Blue is an expansive color. It stretches away and above us.  And it’s altruistic.  People who like blue want things to be clear and straightforward.

But the pond has a particular meaning for me.  I have been drawn pondside at meditative moments in life.  Once I took an unscheduled, unannounced long drive in the morning (this was many, many years ago).  No one in the household was awake yet.  No one knew I had left, and naturally therefore they could have had no idea where I went.  But then I did not have a planned destination.  I just decided to go for a drive in the country,though the roads of the place were not well known to me.  Mine was random wandering launched by mere whim.

At a certain juncture I decided to stop.  A branch of a local river was supposed to be nearby so I decided to park the car and walk to what I thought would be a creek or stream.  I didn’t know my location when I descended down a dirt road through pine woods early that morning.  At the end of the walk, I didn’t find a creek.  Instead I found a pond (fed by the creek?) that was absolutely isolated and still.  It lay upon the ground like an enormous mirror aimed at the sky.  I walked right to its nearest edge and looked down and realized that I could not locate the water’s surface.  All I could see were the seemingly endless depths of the morning sky reflected back at me.

In retrospect it seems almost as though I was magnetically drawn to this water as by a mysterious fate just so that I could see magnificient liquid light.  I have drawn and dreamed about ponds in the intervening years.  I don’t know what they mean, but they are reservoirs of more than just water.  They are filled with resonant, echoing thoughts.  They are mirrors reflecting the depths in life above and below.  And of these depths — whether of love or friendship, a desire for purpose or direction — the edge of the surface is similarly hard to locate.  It could be measured in a few breaths or in distances of long years.