I went visiting yesterday to see my old friend Cezanne at the National Gallery of Art where an exhibit of his portraits is on display through July 1st.  I took my Caran d’Ache neopastels and made a couple drawings in front of portraits of his wife Hortense.

What an education!  How I could stand there all day and gaze at the delicate colors of his paintings.  Or, how I aspire to standing all day admiring his art.  Standing with the box of pastels tucked under my drawing tablet makes one a bit weary, but I must build up my stamina because the pictures are absolutely glorious.

Below is the wikipedia reproduction of one of the paintings I saw yesterday. 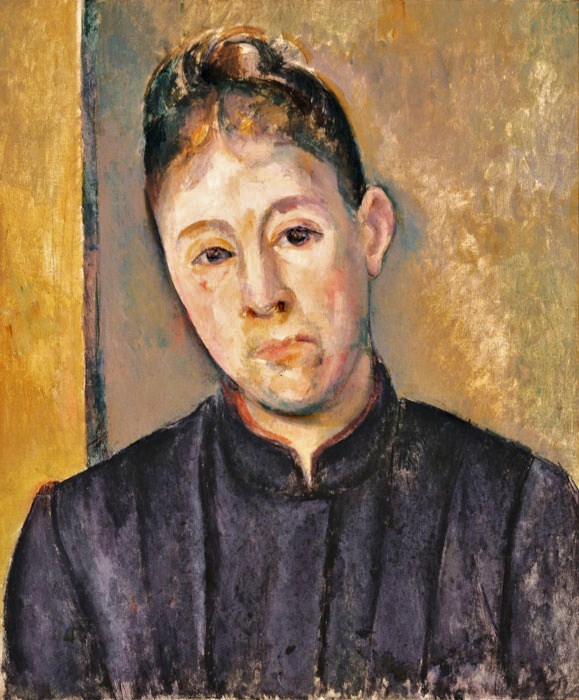 At the National Gallery yesterday I encountered my old friend Cezanne and his Still life with Apples and Peaches.  I made this rapid, unfinished drawing with water soluble crayons.  Cezanne’s painting is dark.  My version brightens it up a lot.  The crayons are very pure.  Cezanne’s painting has, no doubt, darkened with age.  But he also mixed the colors to deepen and dull them, giving them a feeling of gravitas.

I made my little drawing very quickly.  I choose to be impulsive nowadays.  Don’t question whether you have time to draw or raise other obstacles.  Just pull out the notebook and have at it.  With the drawing above, my daughter arrived soon after I started so the drawing didn’t go very far.  But I like it’s summary cheerfulness all the same.

I got into the habit of painting large pictures after I discovered that I could rehearse ideas by first making large drawings. And then the prospect of painting on a large canvas began to seem much less daunting.  I knew that I could work out any problems or uncertainties using the less expensive medium.  At first I even used cheap paper to make the preliminary drawings.  Sometimes to make the sheet large enough, I taped together many smaller sheets.  I got that idea from a cartoon by Carracci that I saw at the National Gallery of Art.  It was one large image drawn on a sheet made from assembling many small sheets.

These days I use watercolor paper by the roll and artists’ crayons rather than crayolas.  But I got my start with quite humble (and very amusing) beginnings.

Illustrated above is a large koi painting measuring 40 x 60 that’s almost complete, and a preliminary drawing for it that is slightly smaller, and which has undergone still further alterations, taking on a life of its own.

As to why I wanted to paint large, I think I merely wanted to surround myself with the images that I love — to be even more inside that world.

Almost a year ago I began working on this cartoon for a painting.  I don’t recall what prompted it. I carried it with me when my daughter was taking a class somewhere, and I worked on it inside an empty art classroom while I waited. It was my portable project.

I had plans for painting it that I still have not as yet realized.  But the idea has stuck with me.  It’s one of several thoughts I have about future flower paintings.  Now it seems almost fortuitous that I waited since the Frederick Bazille exhibit at the National Gallery of Art includes several large paintings of flowers.

I can begin my picture while I have all these exemplary models near by.  Also, you see, being in the midst of the Big Tidy Campaign of 2017, one becomes nostalgic. In fact I discovered that a year had passed after finding, while I was cleaning, an old notebook from a year ago where I had been recording the ideas.

I blogged about it too.  Somewhere I have a bunch of related drawings.  These reproductions will probably be easier to locate than the originals — even now — even as I sort through stuff.

In the Big Tidy Campaign of 2017 certain paintings that I haven’t seen for a while have come to light again.  The painting of flowers above is one of them.  It measures 30 x 40 inches without the frame.  It was one of the first large flower paintings I did, the one that created the theme.

It has other companions that have been developing over the years.  And now that Frederick Bazille’s paintings are at the National Gallery of Art, an exhibit that includes large flower paintings by Bazille, Renoir, Monet and others, I will have lots of inspiration when I get into full flower mode.

Some of the others include these guys:

Thinking about when I’ll be able to get into full flower mode helps keep me on track during the Big Tidy Campaign of 2017.  One needs some motivation!

Since the Bazille show is at the National Gallery of Art in Washington, I’m getting ready to study several of the beautiful flower paintings featured in the exhibit.  It’s great good fortune for me that these works are visiting now because doing large flower compositions has been one of my ambitions for a long time.  I knew of the early Impressionist flower compositions from books but I haven’t been able to see any of the actual paintings until now.

Above is a flower painting I did many years ago.  And below is Bazille’s grande machine of flowers currently in the exhibit.

And here they are side by side (magic of the internet):

To artists afflicted with worry about green, Frederick Bazille gives us all permission to do whatever we like.  I know, “it’s not easy being green.”

It’s okay. There are no rules.  Not even for green.

The National Gallery of Art is hosting an exhibition of works by Frederick Bazille, and I am learning all sorts of things from the great artist and his Impressionist pals. And I’m going to share it all with you, here at my blog.

It’s like the joke about the Dalai Lama ordering a pizza: “Make me one with everything.”

Already this post is turning into Russian nesting dolls.

Anyway.  I like looking at details of pictures (including — I don’t mind telling you — my own pictures).  And for those who want to do abstract painting, you could find motifs for the abstractions by enlarging a small bit of some representational image.

What I like about the parts, though, is the way they reiterate whatever good things are happening in the whole.  At least in a really well organized picture the parts will be doing on a smaller scale whatever the composition is doing on the large scale.  It seems to me that this is true in the works of all the great masters.

So the lesson is — actually I’m not sure what the lesson is.  Just be a great artist.  There you go.  Easy peasy.

Visiting the National Gallery, I made this drawing in oil pastel of a portion of Cezanne’s Chateau Noir.  The colors in Cezanne’s picture are so dark and subtle that mine looks very brilliant in comparison.  I was mixing together colors to get closer to what I think might have been some of Cezanne’s choices.  But his picture is dark in ways that might be effects of age as well.

Certainly he was wont to mix together lots of pigments to achieve his effects, and the long term consequence of so many pigments being mixed together may be both a darkening and dulling of the colors.  Whatever the case, his picture is magnificent in its somber darkness.  Those qualities would be difficult to capture in the medium I was using though — especially with the particular palette I had available — not impossible, but very time consuming and difficult. So I contented myself with brighter effects. Plus I enjoy making a version of the painting, an interpretation.  My choices are informed in part by what I know of Cezanne’s use of watercolor during this same period.

Here’s his painting and a view of the left hand section featured in my little drawing, which is 9 x 12 inches.  Cezanne’s painting measures 29 x 38 inches.

I remember such a long time ago.  I was a high school student who had fallen in love with a much, much older guy — this guy above, the artist Duccio di Buoninsegna who painted this picture of Jesus calling Andrew and Peter.

As Jesus walked beside the Sea of Galilee, he saw Simon and his brother Andrew casting a net into the lake, for they were fishermen. “Come, follow me,” Jesus said, “and I will send you out to fish for people.” At once they left their nets and followed him.

For me the calling I heard was to become a fisher, a fisher of pictures.  When I catch people, I catch them through art.  Drawing and painting have become the bait I use to catch people.  When I catch them, it’s to say “Look!  Look!  The world that God made is filled with marvelous things! Let’s look at them and think about them together.” Okay, maybe I don’t say it in quite that goofy way but that’s the basic sentiment nonetheless.

Let’s pay attention to what we see because we are surrounded by marvels.

In my youth I fell in love with “the Italian primitives” at the National Gallery of Art.  I started my journey in Gallery No 1, and it was shock and awe from thence onwards.  I had no idea how to do any of the things I saw, not drawing, not mixing color, not painting.   But I felt instinctively that it was the thing for me.  Somehow I would learn.

Little did I know how lasting the influence of the first loves would be.  Little did I know how much just Duccio di Buoninsegna’s painting alone would affect me.  Decades later I am mesmerized by lattices such as the one in his painting, the net that holds the fish.  I paint them in different ways than he did, but they occupy lots of space in my cranium.

Even a fish’s body has a lattice incorporated in it.

So, artists and art lovers, let yourself fall in love with art — and see where it will take you.