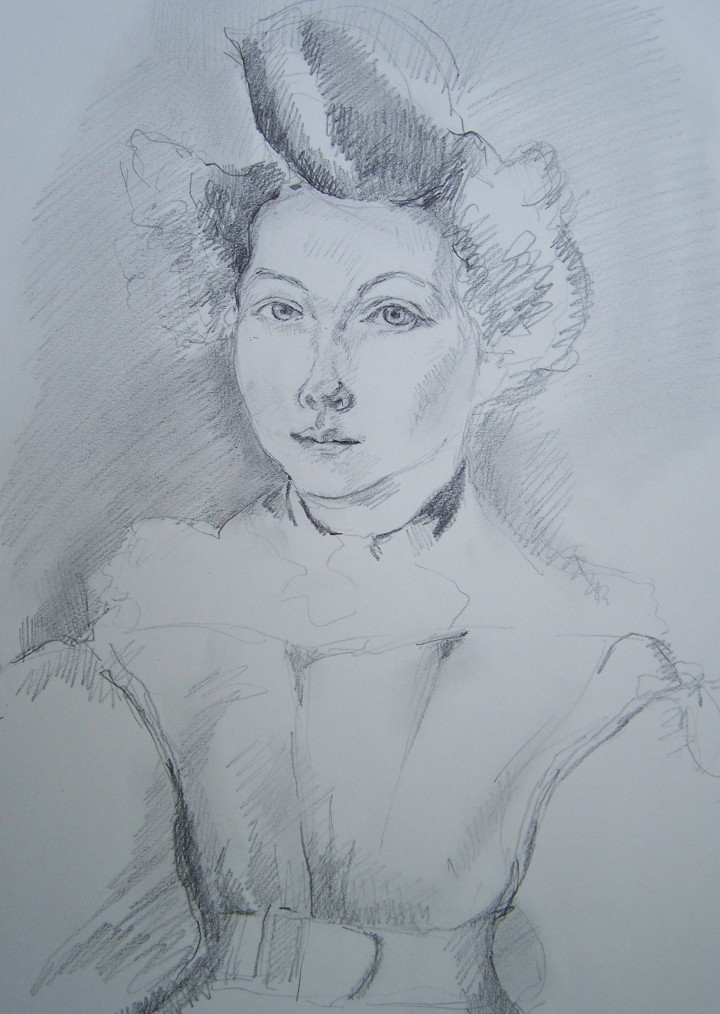 Today I made a fast drawing after Corot’s portrait of Laure Sennegon (plus tard Mme Baudot).  I have been thinking of all the ways I might recharge my batteries, and certainly one of the ways is to restudy works that I love.

My daughter decided to do a version of the Corot portrait also.  Hers shows more of an indebtedness to Matisse.  Also, as you can see, she chose an interesting if ephermeral medium for her drawing. 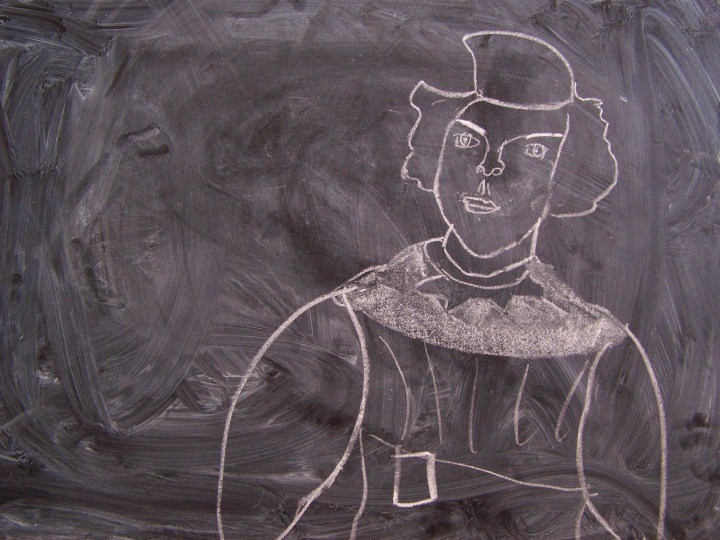 I believe this was the first version.  The more detailed version came later (see previous post).  I like this one better.  It’s the more psychological of the two.  Eliminating all the “stuff,” I focused completely on her face.  All the territory I tried to understand could be found around the eyes and nose and mouth and jaw.  Lights and darks appear with the logic of a flashlight beamed toward something.  It is all incomplete.  It’s a random visual journey.  Except that it isn’t random, rather only seemingly so.

When your mind wanders, it doesn’t take a random journey.  It journeys to where the interest lies.  My eyes moved through the picture, and my hand drew whatever had caught my momentary attention.  And my attention kept coming back to the interior of the face, searching out the interior of the woman’s painted thoughts.

Isn’t that the amazing thing about Picasso’s picture, that he painted someone thinking?  And in making a copy of his painting, I caught a few of the lady’s thoughts too.  Her thoughts, Picasso’s thoughts, my thoughts are all somewhere in the mix.

Who says that making a copy is just an exercise?

[Top of the post:  Drawing after Picasso’s portrait of Corina Romeu, by Aletha Kuschan] 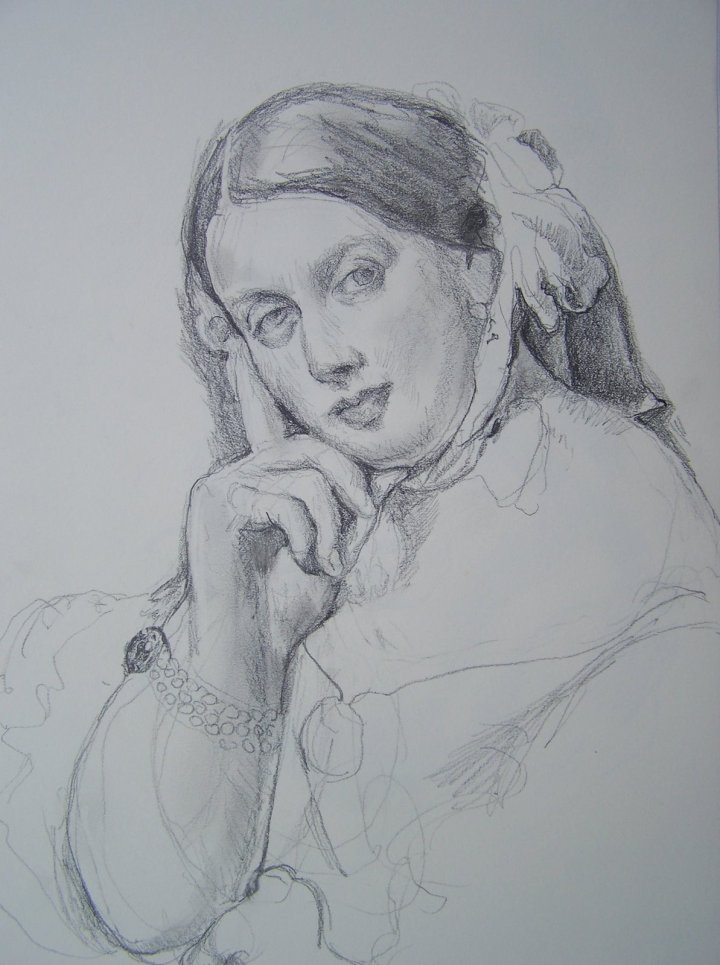 I made this drawing after Ingres’s portrait of his wife.  One finds quite a bit of distortion in Ingres’s images, and his portrait of his wife, though it seems so “realistic,” is no exception.  Her arms are very strange.  One hand folds under her arm and morphs into the most amazing shape.  And the arm she leans on is very hefty.  And these qualities must have really captivated me because I exaggerated them further though not intentionally.  I was trying to make a faithful copy.  I was completely caught up in the image.  I let proportion fly out the window — which is a good thing to do sometimes.  What the heck.  Just let yourself go.

As a consequence, I’d advise you not to mess with my Mrs. Ingres.  She’s got a wicked right hook.  Believe me.  She may look sweet, but don’t cross her.

[Top of the post:  Drawing after Ingres’s portrait of his wife, Delphine Ramel, 1859, by Aletha Kuschan]

Art happens as a consequence of many small decisions laid out over many days and years.  I was doing a historical portrait for a commission and needed some feet for one of the subjects so I became my own model.  This isn’t the only drawing I made of me wearing my nice shoes.

This was actually very enjoyable to draw, too.  I found freedom in the drawing that wasn’t available in the commission (for fairly obvious reasons).

I think the shadow served to give me some ground to stand on.  That’s always a good thing to have when dealing with feet and shoes.

[Top of the posts:  Drawing of My Taupe colored Pumps, by Aletha Kuschan, pencil]

This is just an ordinary cat, attracted here perhaps because of all the fish.  The fish had better watch out!

[Top of the post:  Drawing of a Cat, by Aletha Kuschan, pencil]

A very pencil-y fish here, where lines wiggle like waves of motion in the stream of ideas.  This one has lovely dots, too.  When my daughter was a baby and got her first lessons in art, they consisted of me dotting a paper over which she crawled, which I did while saying, “dot, dot, dot, dot” as I watched her laugh and squeal with delight.

[Top of the post:  Drawing of a Fish I named Pixel, by Aletha Kuschan, pencil]

Here’s the favorite shell on its side.  These shells wafted up upon some beach of the imagination, have traveled half way across the world, are still whispering the wave music of their interior chambers.

[Top of the post:  Sea Shell by Aletha Kuschan, pencil]

Its top is like a mountain or a Christmas tree.  I drew my favorite sea shell in spare lines.

[Top of the post:  Drawing of a Sea Shell, by Aletha Kuschan, pencil]

Blogging gives new meaning to the question, “what makes people click?”  Oh, I guess the question was “what makes them tick?”  Whatever.  I’d be happy to know the answer to either one.

[Top of the post:  Drawing of My Mother as a Young Woman, by Aletha Kuschan, pencil] 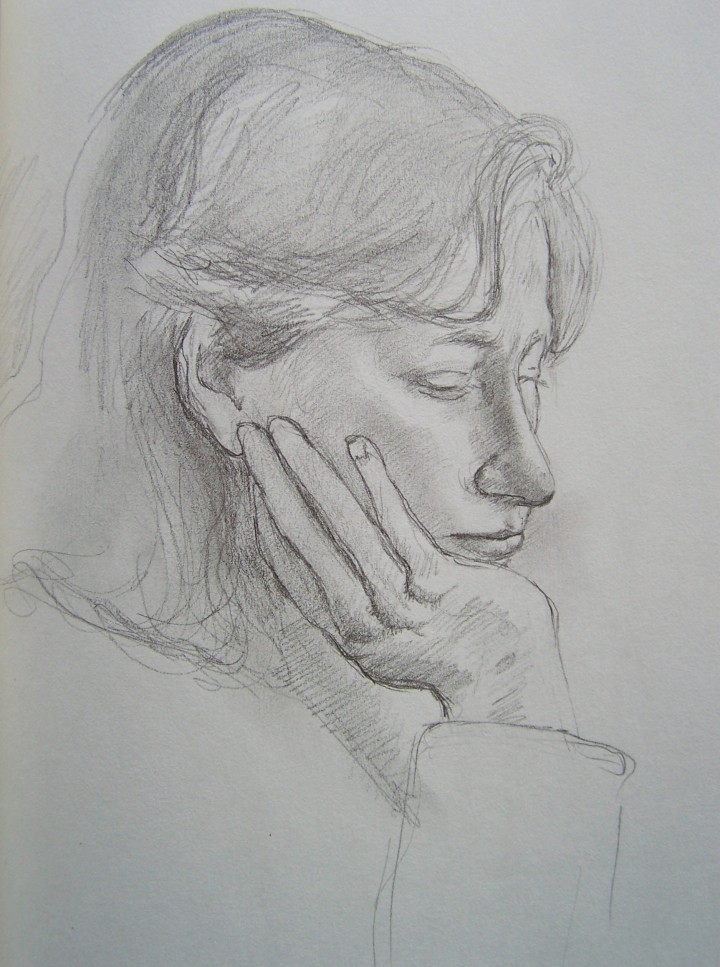 I’ve been staying in a small Southern town the last several days.  In my room here I have a window with a quiet view of some shrubs and pine trees.  A couple mornings when I woke early I’d take my tea beside the window as I planned the day’s activities.  This drawing reminds me of that sort of meditative, planning session.

It’s good to live inside the spaces of such moments — to really savor them for their gentleness and the breathing space they offer.  Sitting beside the window with its quietly lovely view I found myself confronted with a great many memories simultaneously as I was making plans.  So it was a window with three views: the past, the present and the future.

[Top of the post:  Woman leaning on her Hand, by Aletha Kuschan, graphite pencil]