I like to draw a lot. Sometimes these days I’m inclined to draw just to be drawing, choosing images somewhat randomly. I decided to draw a blue jay and made four versions of him together.  I think the face was already there.  Flowers came later, and some kind of fruit hidden among leaves. There’s still lots of white space left so other items many join the group.   We’ll see.

One problem that artists have at the beginning arises from a misapprehension.  When seeing a painting in a museum, people often think that that’s it.  They see a complete, whole and finished thing and mistakenly suppose that the artist just painted it.  Such a task, anyone would acknowledge to be difficult, but to create ex nihilo — which is often what people mistakenly suppose artists do — would be really, very hard — perhaps impossible.  In fact most complex pictures have lots of studies that lie behind them.  Studies can take many forms, but usually they exist.  Typically they are not on display.  They reside in the background.  They lie stored in a drawer in the artist’s studio.

What defines a study?  One might say that it’s any work of art that takes a separate aspect of an idea and pursues it in isolation.  When you study old masters’ techniques, you find many such drawings that rehearse ideas that are later used in completed paintings.

So, it’s “okay” to take an idea apart and pursue it in bits.  The drawing at the top of the post is that kind of drawing.  I was interested in the drapery and drew it in isolation.  To create this drapery I had first made a photograph — but even the photograph is part of the pursuit of an idea.  I’m still not certain where it’s going.  Or if it’s going anywhere.

The figure has no head or face and hardly any arms.  These details don’t matter at this juncture, and I left them out.  The details here are to drawing what scales are to music.  This is a drawing of riffs and phrases.  Such things have their own charms.

You may recall that last month I had asked Riosriosrios to draw Durer’s Rhinoceros.  (I’m kind of a Durer fan.)  The rhino was fabulous too!

[Top of the post:  Durer’s Owl, drawn by Riosriosrios of wordpress] 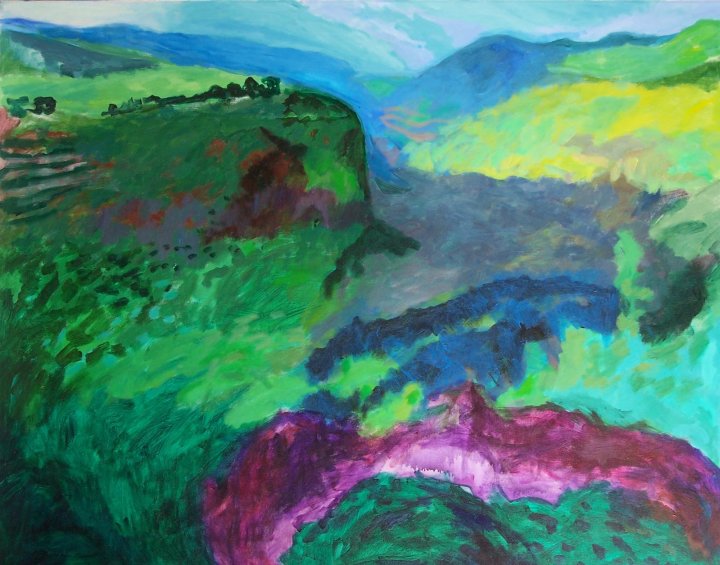 Sometimes you paint something in much the same way you’d go for a walk.  You just decide that it would be pleasing to  be occupied with visiting an imaginary place, and in the case of art, one visits by painting.  That’s how this picture came into being.  I think I must have painted it in winter.  I was definitely in the studio and not anywhere near Hawaii.  The river, meanwhile, could be purple in nature by some rare convergence of weather and odd lighting, but chiefly this one is purple because I felt like making it that color.  Also, it’s rather a gravity defying river in its gesture.

Sometimes you cannot explain why things have to be as they are, but the composition of this picture obeys a chromatic and compositional logic that are necessary to it.  The things that make it what it is increase it’s tropicality, and I wanted it to be very tropical.  Perhaps it became more tropical than nature herself ever is.

[Top of the post:  Tropical Ridge, by Aletha Kuschan, acrylic on canvas]

These fish are vying to reach the center.  Something’s going on there.  Others of them swim around this activity, not participants exactly, yet aware in waves of concentric bustle.

Oddly enough, this used to be a painting of a mountain.  Now it’s fish.  The mountain just wasn’t working out.  An artistic real estate transaction needed to take place.  The mountain moved out.  Fish moved in.

[Top of the post:  A Study of Koi Swimming, by Aletha Kuschan, acrylic on canvas] 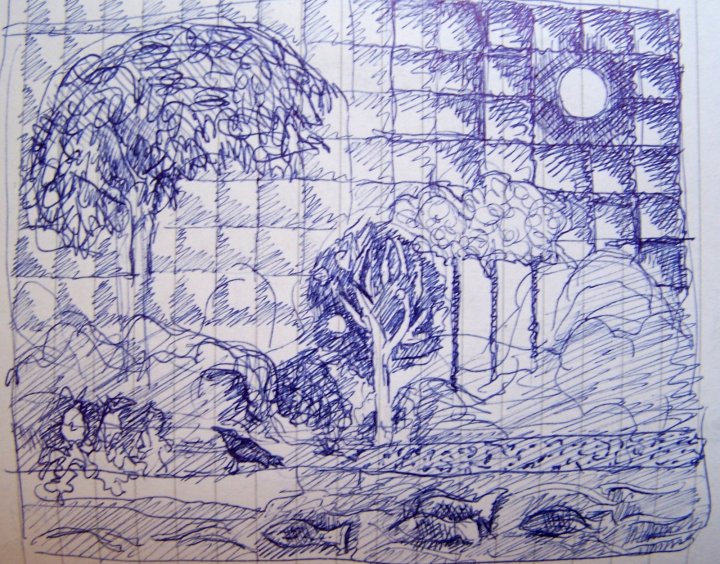 This sketch for a painting is more about night (and squares) than about fish.  (It’s a sketch for a painting.)  But, lo and behold, the fish snuck in.  I count five, maybe six along the bottom.  This is hardly more than a scribble, but I love this.  If somebody calls me on the phone and takes up a whole bunch of my time … friends … this is what’s taking place on my side of the conversation.

[Top of the page:  Study for a painting, by Aletha Kuschan, ballpoint pen]

Ever since discovering, by golly, that our computer had photo collage software on it (who knew?), I’ve played around with images by combining things on the computer and then altering them via the computer’s many interesting graphic features.  This “fishwave” is one result.  A photo of a heavy drapery is blended with some pictures of koi swimming and all that has been run through the washer on the permanent press cycle until it looked as you see it above.  Sometimes I paint from images like this that I’ve created on computer.  After they become paintings, they can be photographed and rerun through the same computerized process again to be transformed into something else.   Metamorphosis.

Then, too, there’s the computer between the ears with which we can attempt daring things.

I’m doing something today that I don’t often do — I’m chilling out!  And wishing you flowers on this lovely Sunday afternoon.

Every once in a while here, I post a collage or a “cartoon.”  This cartoon (large compositional study for a painting) belongs to the Big Tree idea that I posted in mid-June.

Other collages I’ve posted include this abstract image, this idea for a child’s mural, and this study of a detail of a painting.  It’s fun to organize them so that they can be compared.  I’ve never seen them together except here on line.

For almost every subject I undertake, I do studies.  Some of these studies take the form of collage. Collage is such a free and expressive media.  You can organize large areas of a picture in one swoop.

I like to explore the possibilities and details of the images I design.  Often these studies vary enough from the original to suggest new projects.  This particular collage was supposed to help me figure out the tree idea, but became more about the fish.  It takes on a new interest for me now as I embark on a new round of paintings of fish swimming.  Meanwhile the fish in this collage have found themselves quite a nice little pond where they bob up and down like corks.

[Top of the post: Cartoon for the painting “Big Tree,” by Aletha Kuschan, Xeroxed pictures glued to paper with crayon drawing]

When artists go fishing, it’s a little different sort of thing than when most people fish.  I’ve begun a series of koi paintings that occupy most my time.   Of course, the fish in the drawing are obviously not koi.  They are just fish.  They’re friends.   My generic fish that swim in the notebook in search of a fine blue stream.   They are rambling fish of imagination and dreams.  They come to cheer me on in my larger project that I’m just now beginning.Come visit my store on CafePress!

[Top of the post:  Swift Swimming Fish of Dreams, by Aletha Kuschan, drawing in a notebook]