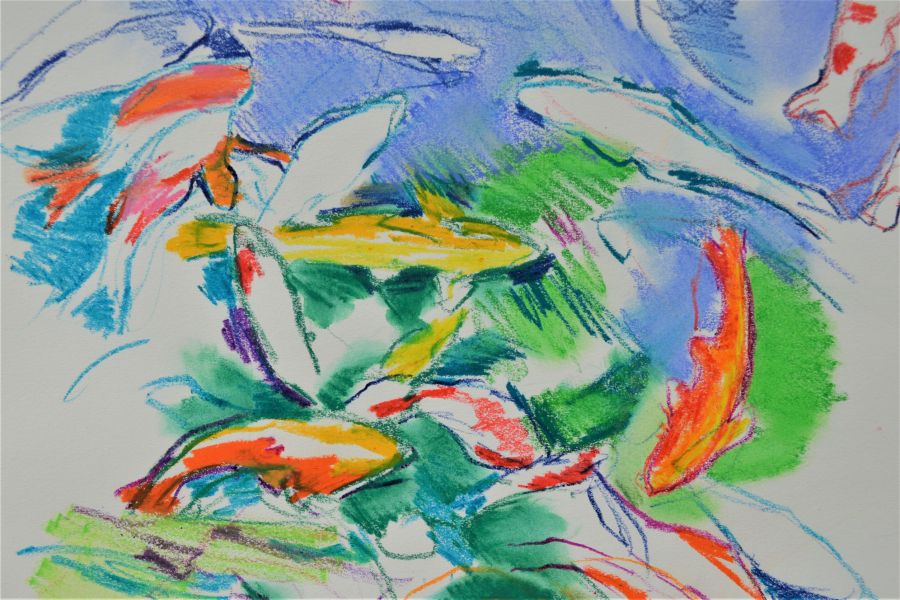 We had a marvelous thunder storm last week. My town had a power failure around 6:30 pm. I drew in the twilight. I was using children’s crayons again, a most forgiving medium. I drew until I couldn’t see. Then I lit a candle and drew a bit more in that odd light. Here’s one drawing from inside the gloom. The photo doesn’t show what I saw, but reveals how the drawing looked when photographed in daylight.

The drawing is light. What I saw in the motif (copying from a painting) and on the page, those perceptions were both dark. I couldn’t tell what colors I was using. I couldn’t even read the words on the crayon label. I just picked up a crayon and drew. If I couldn’t see the line at all, I chose another.

It was a really fun way to spend the time. What else are you going to do when the lights go out? The power outage lasted until 8:38 pm. Observing my own mind’s responses was intriguing too. Drawing in the gloom was pleasant at first. After a while, I began to feel though as if it were a game. I was ready for the lights to be back on. That’s when I felt my keen dependence on modern technology. I really do love modern lighting! My mother grew up without it. Her childhood was lit by oil lamps. Strange to contemplate my nearness to that world.

Anyway, the lesson of the gloom was that your response to drawing can always grow in freedom. While I drew in low light, I drew without expectations since I could barely see what I was doing. When the lights returned, realizing how wonderful it felt to “just draw” I resolved that no matter how much acuity I enjoy that I will always aim to balance deliberation with letting go.

Alternate between those states.

I made the version that’s light and airy (the previous post).  Then I wondered how it might look at the other end of day.  So I made this version.

The shell began in morning light. The first marks were still morning thoughts. Interruption.  We needed to leave for our much longed for, much anticipated Saturday walk.  We’d waited all week for the chance.  But that walk took far longer than we had imagined.  We probably walked 46 city blocks.

The walk began at Jason’s where we get a light lunch — an egg and cheese bagel with coffee for me.  After the meal, my daughter and I walked to an art store across town over 20 blocks away past all manner of urban landscape. Coming back we were exhausted.  I had bought an armful of canvas panels.

Back at home returning to my seashell I found the light radically different.  But I hadn’t gotten very far along in the morning so I decided to keep working on the painting. While I painted I noticed that the muscles in my legs felt like they were vibrating.  Around 5pm the light changed.  It had become crystalline.  Waning light wrapped around each surface.

There is a beautiful, ineffable character to evening light. The clarity enchants.  Artists who paint twilight skies have little time to capture their effect.  And the same quick departure of the light influences the indoor still life too.  The table and its objects — the shells, the big fat black ginger jar decorated with a fruit motif, the pale blue table cloth — all coalesce in suspended time.  In dream light. Time, space, gravity, mass are all entangled in weird ways according to the physicists.  Well, you can sure believe it in late and waning day.

Finally I had to quit the painting. Mentally, though, thoughts linger inside that other light.

It is impossible to paint something like this without reference to Matisse.  Still I think one can evoke Matisse while being fully oneself, idiosyncratic and contemporary.  It’s also quite possible to find a little El Greco in one’s desire to make an image like this one.  I like conversing visually with old painters translating their notions into my era’s slangy modern idiom.

This landscape is a retrospective glance.  I first painted this motif many years ago, so many years ago I’ve lost track.  However, this latter day version is quite different while simultaneously being quite the same as its older counterpart.  It is as though one strolls through a landscape that one has known all one’s life.  But then isn’t painting always like that?

Sometimes I think that I am just painting one picture.  It is merely the seasons that change.