Bold yellow tea roses, a brilliant violet color in the background, a white and blue table cloth along with three bright orange, plump persimmons: these compose the scene with additional help from a jaunty white pitcher in the center that has a single pink painted rose decorating its rondure. Sometimes the colors and positions provoke a mood.  This arrangement seemed provocative to me. It feels assertive. I thought the objects seem to speak. It is for each individual spectator to decipher life’s bold messages.

Two vases of roses sit on a honey colored wooden table.  The far edge of the table is visible on one side and the rest is covered by a shimmering yellow-gold cloth.  Behind the whole scene is a violet colored cloth.  Both vases are abundantly stocked with roses.  One bouquet sits in a clear glass jar. The other, a white pitcher, is also filled with numerous roses of many colors.  One single spent rose lies flat on the table.  Beside it sit three bright orange persimmons.  In between the two vases sits a blue pedestal bowl. A few other objects of ambiguous identity sit behind or beside the white pitcher.

This is one of the most complex still lifes I’ve ever painted so far.  While it is challenging to capture the flowers since they soon perish, it’s also important to make something of all the relationships of all the things.  The design on the cloth, its fold and foreshortening are the gravity of the picture. Everything has to sit upon that gold field and seem to belong there, and to seem as if it might always be there in that forever sense of art.  Long after the real flowers have faded and disappeared the appearance of the flowers can still last.  And the picture has to hint in the direction of that poetry, has to become a memory of things seen.

Golden: Two Bouquets on a Table is a pastel painting on sanded paper measuring 18 x 24 inches. 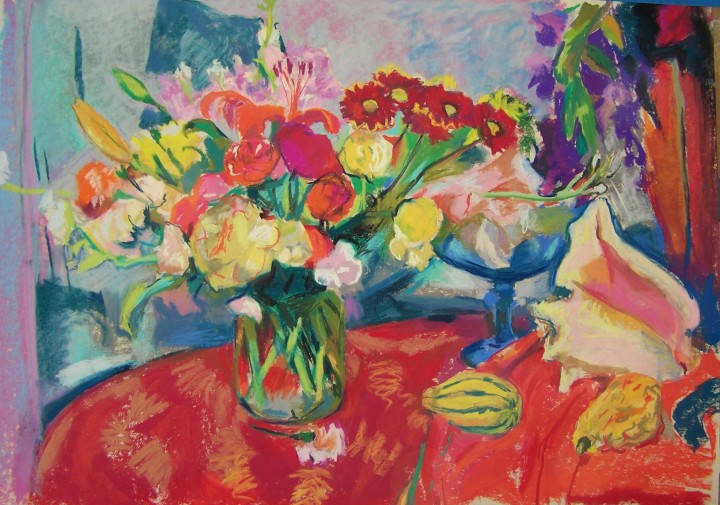 A complex ensemble of varied objects sits on a table decorated by a large bouquet.  The table cloth is brilliant red.  The flowers are of many types: lilies, daisies, carnations, roses.  A couple of winter gourds, a queen conch seashell, and a blue pedestal glass filled with smaller seashells sits beside the flowers.  Behind them a cloth of pale blues and silver adds a sky-like element.  And off to the far right a deep red-orange cloth peeks out framed by some hanging purple flowers from a vase sitting outside the picture frame.

The complexity of a scene like this one gives the artist many sources of intrigue.  I love exploring the shapes of many things when they are bunched altogether.  It’s a passion that hopefully transfers to the spectator. In any scene of things, many wonderful visual features are always present.  One of the aims of visual art is to provoke us to look more deeply into the appearances of the world.  Every corner of the universe is filled with splendor.  And splendor can begin with the simple contemplation of even a color.  A brilliant red is a powerful sensation in its own right.  And the shapes of things, the colors of many things, the lines that the mind describes around things are all sources of the most powerful fascination.

The Red Cloth and the Big Bouquet of Flowers  is a pastel painting on sanded paper measuring 18 x 24 inches.

If a simple glass pickle jar gives you joy, you know you are a joyful person. I found the pickle jar in my mother’s cabinet.  It was one of those things my parents kept out of a desire to give all possessions a second life. Emptied of pickles it became a flower vase.  I cleaned it up after its years of disuse and marveled at how lovely the light is that passes through simple clear glass.  The flower stems randomly distributed in the jar offer beautiful abstractions of dark green.  The glass also reflects and intensifies colors in adjacent objects — the table cloth, the backdrop cloth.  It catches highlights of daylight entering the windows.  It is in short a light catcher.  Whoever wishes to meditate on the meaning of the present tense can gaze into its interior and find passages of beauty to inspect.

The flowers are the heroes of any flower still life: comprised in this instance of carnations and a single large yellow tea rose.  But a clear glass jar also brings strong poetry to the scene.

Finding the green pitcher was one of those wonderful thrift store discoveries that every flea market aficionado loves.

The pitcher has no value in a monetary sense, but it is visually rich.  It’s one of those objects that lends itself to numerable interpretations. Placing it into this still life gave the flowers a new character.  I had been portraying the same hardy flowers over the course of several days (it is amazing how long well-tended cut carnations will stay fresh).

The green becomes a factor.  The green of the pitcher, colored like a grassy lawn, brings its own associations of spring, evoking the sense of a landscape where flowers bloom.  Of course this vase has its own porcelain flowers, too, ones that decorate its waist.  A bright gold-yellow cloth and variegated violet and pale linen-colored cloth behind the flowers create a light-filled scene.

Among the first of a suite of small flower paintings, this simple scene depicts a glass jar filled with flowers sitting on a table top with a gold-green cloth against a backdrop of rosy violet. The principle flower of the group is a large yellow tea rose and surrounding it are carnations of different hues, pale pink, rich red, pale yellow.  The green stems of the flowers create a lively abstraction in the jar’s interior where reflections of light enliven the pattern of light and dark shapes.

Bouquet of Carnations is a pastel painting that measures 13 x 16.5 inches. 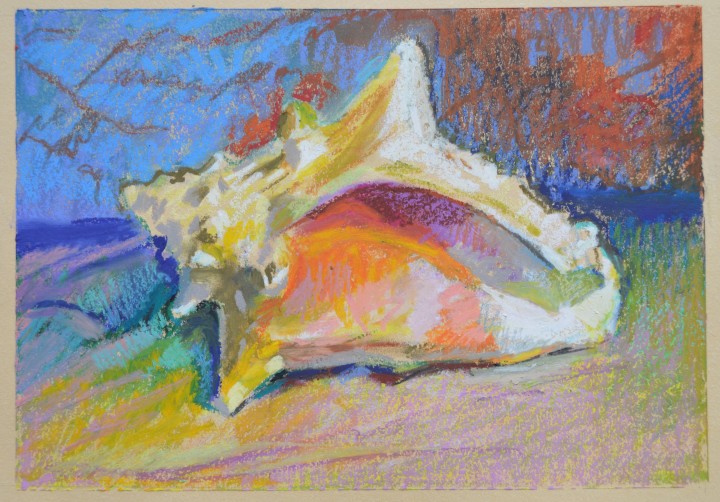 A small queen conch seashell, portrayed life size, sits on a still life table where the surrounding colors recall the sand, sea and ocean air. The elongated shell rests on its side.  A great variety of colors mix to recreate some tropical weather far from the seashell’s sea depths home. A evocative, poetic image of island life that a seashell carries around by virtue of its stunning shape can deposit island longings into the mind of an artist stranded in the suburbs.  And through a picture perhaps the island whimsy reaches even other farther shores.

The center of the shell is a rich and warm orange red, made more vivid by the contrast of nearby tones of pale and dark blue. Marks of the drawing are plainly visible and at the same time the illusion of the picture is strong in an impressionist way, most so when the oil pastel painting is viewed from a little distance. 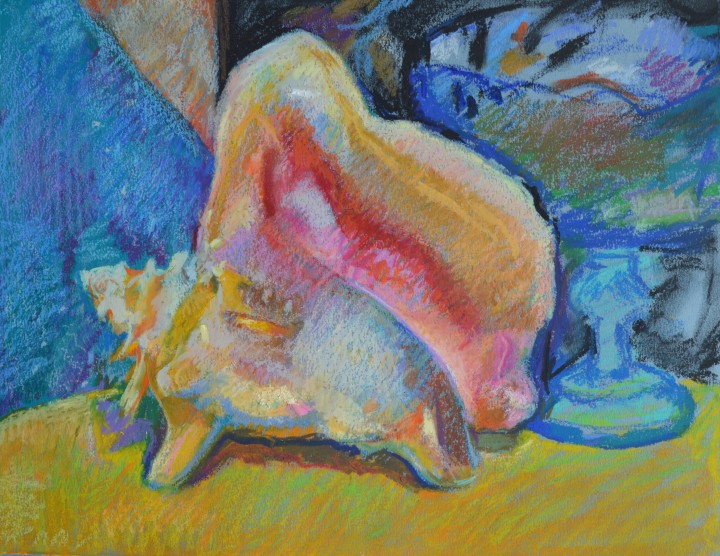 The wing of the seashell, like the wing of a bird, evokes a freedom of spirit.  And the intense and varied colors of a seashell’s glassy surface offer visual effects that are stimulating and marvelous to contemplate. I love to look at and to draw seashells.

In this still life all the surfaces become mental territories — dreamlike in their intensity — whose colors vary and vibrate. Next to the queen conch, on the right, sits a blue pedestal bowl whose curves distort the background cloth seen through its glass. Both objects, though without clearly obvious meanings, seem iconic to me when I contemplate them in the still life setting — by their steady presence — by the way their abstract shapes lock together forming strong lines and contrasting edges.

I believe in opposites (a thing and its foil) as a good principle for learning.

It’s a small room. Anyway, I didn’t want to be too dependent on the actual still life this time. And I wanted to travel in hero Pierre Bonnard’s shoes a bit.  More about memory.

I guess now’s a good time to look at Bonnard again with the negative spaces particularly in mind.

I just wrote a post about that sort of thing – the spaces between spaces — a day or so ago. That’s probably why I’m thinking about it now. I was looking at the sketch for the still life and wondering how it would be to think about everything that I wasn’t thinking about when I drew it. The task is greatly complicated by the absence of the actual still life!

Nonetheless (never one to be deterred) there are other ways to think about the spaces between things, even when drawing from memory. I can put parts of the still life together temporarily. I can also just have a whack at drawing the stuff between the stuff (even from imagination) and see what new stuff emerges.

Nothing ventured, nothing gained.

The still life with flowers

has got a new frame. I may continue tweaking the image — still figuring that out — but it has its frame so that in all changes going forward they will harmonize with each other.

Here it is below crammed into the studio. Sitting above it is probably the next thing that’ll make the trip to Georgetown Frame Shoppe, the pastel koi.

Peter did a fabulous job on the corners of this beautiful molding. 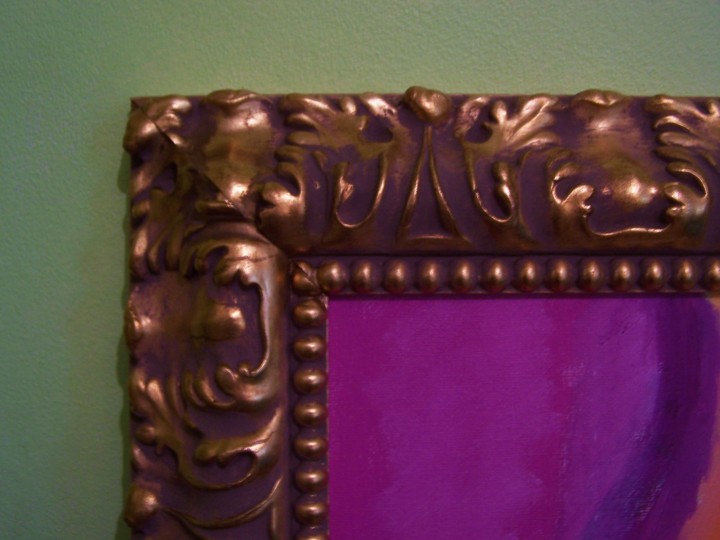