puts me into a watercolor mood — that and the late springtime heat.  I would love to dive into the pond with the koi. I’d also love to paint in watercolor again.  I need to clean the studio (again). The watercolor palette is buried somewhere under the pile of things. I need an archeologist to help me excavate! 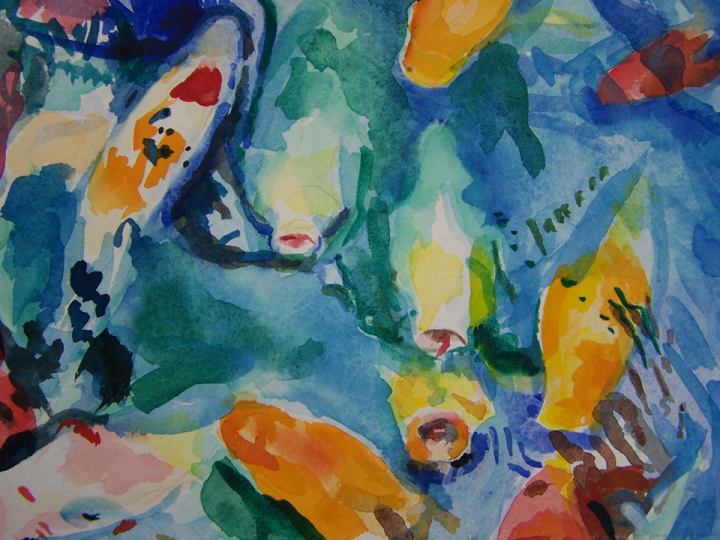 These are more things that I found by visiting my facebook page to hunt down the owl.  See, what you find when you go looking for an owl!

Behold the roses I completely forgot I had painted.

I had arranged a bunch of things, which I photographed and posted on facebook. I found them a short while ago when I went there looking for the earlier version of the owl.

It’s a strange thing to paint pictures and then utterly forget that they have even existed.

I remember painting the doll, but not the fruits. I wonder where this stuff is now …

I will do many owls.

But I was looking for this owl because I wanted to think about the way I had drawn him before. I think I made this drawing about four years ago around the time that I got the candle owl from the thrift store.

In dark owl time I drew him darkly to begin thinking about his wise place under the flowers in the large still life in front of the window at twilight. These are not the colors of the picture. They are the colors of the corner of the room at that comfortable hour. For the quiet nocturnal enjoyment of drawing inky shadows, I arranged him in a mantel of blues and blacks far removed from the light and airy pictorial table under flowers.

But this drawing is for getting better acquainted with the owl, not for figuring out the specifics of the painting — which is still a plan for a painting, not an actual painting.

I took some photos of the set up, back when it existed. It’s long since been disassembled. The camera distorts all the relationships between objects so that they don’t conform at all to the large cartoon I made for the painting. But the mind distorts things, too.

And yesterday I added the window behind the flowers using the blue pastel made at twilight, added it in a pen drawing, the first version of the altered idea. 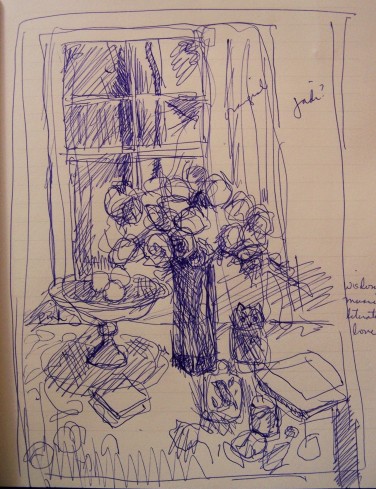 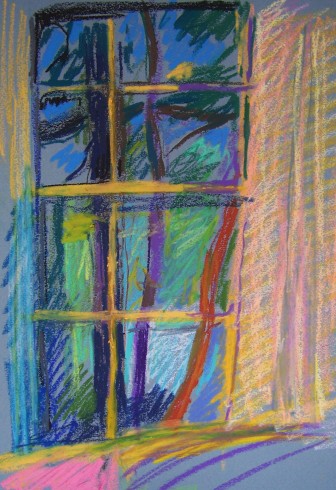 The idea of the owl in that sketch is fuzzy and scribbly. The scribble version by its incompleteness can offer suggestions of ways to go forward with the idea. Indeed that is the chief virtue of scribbles, their openness to suggestion, the ways that they reveal possible paths without insisting on any singular interpretation. 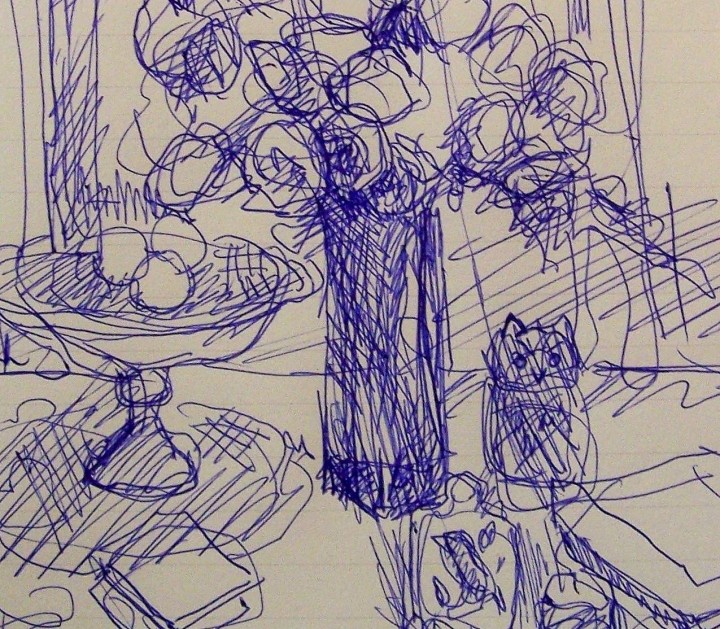 UPDATE: In response to Judith’s comment I’ve included a close up of the owl in the drawing (the ability we have now to enlarge digital photographs this way is marvelous).

The owl is an inch high in the actual drawing. You can see if you look closely that his body was longer at one point and that I just indicated his face and the holes for the candle light in his body by a few marks then sort of scratched over the whole to make him dark. The whole concept is gestural and quick.

There’s a kind of drawing where you just record your ideas and you don’t fuss over them. Imagine how many drawings one can make in a day — when there are no worries. And if you are, nonetheless, being specific about the thoughts then the drawing still records a lot of information. Think of it as like taking notes.  It’s not a kind of drawing to submit to “critiques” (you would never invite someone to critique the notes you take at a meeting, would you?) and yet sometimes such drawings will turn out to have a delight all their own.