I observed a scrupulous realism and yet my drawing has turned out rather vague!  Well, my subject was a little vague too as it happens.  I decided to draw the lush deciduous trees outside my window which I view at eye level (being on the 7th floor).  I followed the lines that caught my fancy as I saw them, but folliage does have a tendency to wiggle this way and that as does my attention span.  And lacking the context of buildings or other more solid objects to anchor the subject and make it more intelligible, I got this nice grouping of scribbles.  But I don’t knock them.  You’d be surprised how effective such experiences are for creating memories.  I’ll probably recollect the quiet morning of this drawing nostalgically someday.  Scribbling is almost olfactory in its ability to seize memories.

I rather like them.  I might call it a self-portrait since it registers the inner me rather keenly.  This is what it looks like:  the interior thought-world of someone who is perpetually in search of her car keys.  At least my inner thougths are nicely colored.

Drew this little sketch using my left hand.  Someday I’m going to assemble a whole blog devoted to nothing but my left-handed drawings.

Regular readers of this blog know I like to make copies.  I also like to have fun.  A while back when I was drawing horses I made these two drawings which live on the same sheet thanks to the invention of construction tape (used to make a larger sheet by combining several sheets together).  I was copying horses from Japanese art.  Unfortunately I can’t remember who the artist is.  Hiroshige, Hokusai, someone else?  I dunno.  But here they are.

My copies are definite interpretations.  Mine lack the rigor of the originals (boo woo) and also have a laisser-aller element that I attribute to the “fun” aspect.  If one were turning Japanese masterworks into kid cartoons, you might get a drawing somewhat a kin to these.

But, hey, sometimes an artist just wants to have fun.

Sometimes less is more.  This one’s my favorite so far.  Just squiggly lines and a garden inside them. 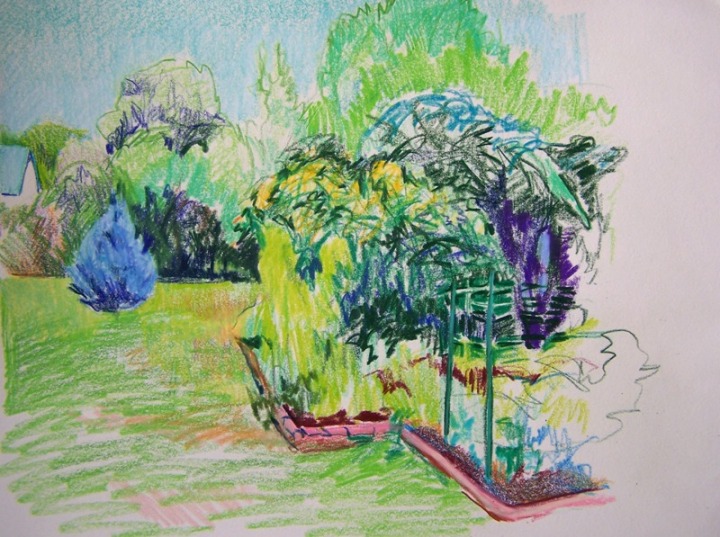 After staring meditatively at fish all day, as delightful as the koi pond is, still one wants a little action of the feet.  Thus there’s nothing like a stroll in a garden.  Over my morning tea I have found myself thinking ahead to life beyond the koi and feeling sure that another “series” of some sort is brewing.  So I have revisited some garden drawings I’ve done in the past and have been trying my hand at some new ones.  Also, having acquired of late a great enthusiasm for colored pencils, I’ve started making some little sketches of the Jerusalem artichokes blooming in the backyard.  Well, I try to focus my attention on the flowers, but something about the little fir tree always steals the show.

You have to watch where your thoughts lead you — perhaps to a fir tree rather than to flowers.  Sometimes you don’t know what the subject is.  You just have to be willing to let the subject reveal itself.

I’m in that stage.  I watch and let the garden talk.  Sometimes one also lets the drawing talk.  I might have cropped the drawing on the right and got rid of the empty white space.  But for some reason I cannot specify, the empty space there is also part of the picture.  I drew a few lines into it, and frankly those few sketchy scribbles seem as significant as any of the rest.

It’s a bit of a conundrum.  But it’s also why we have sketchbooks.

I was browsing through the exhibition catalog of the National Gallery of Art’s Jan Lievens show today.  Made a quick drawing after the wonderful “tronie”  Man with a Beret.  I used colored pencils.  How I’ve changed.  I used to be such a snob.  I didn’t think that colored pencils were a “serious” medium.  Now I love them.

I’ve grown.  Nowadays my attitude is, “if you can draw with it, how wonderful.”  I love drawing.  Whatever you can capture ideas with is a “serious” medium.

Get your own copy of Lievens here.