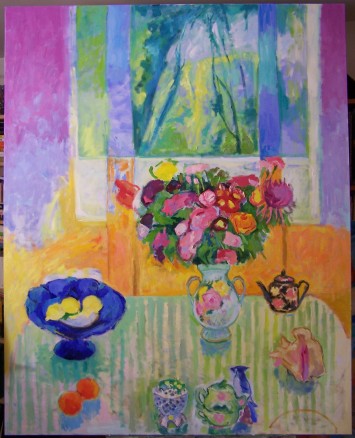 The bars framing the flowers on either side are products of Pierre Bonnard’s painting that I’m emulating.  They have no other referent.  They’re part of the structure of the window in the Villa Castellamare so I either make stuff up (which may happen) or I follow Bonnard’s lead.  In his painting the two beams are different colors due to alterations in light.  For the present I’m doing what he did so that the left beam is ochre colored and the right is bluish.  (It’s been a long time since I saw the actual painting so I have no idea what the real colors are and book illustrations always exaggerate.)

Anyway it makes me wonder what Bonnard was thinking.  Because the foreground things in my painting are all different from his — especially the flowers — I’ll have to adapt all the Bonnard elements to go with my changes.  All that happens later.

For now I had to decide whether the ochre creeps up and the blue creeps down — and I decided that they do.

6 thoughts on “weird and arcane things I must ponder”